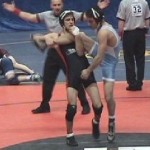 Wednesday evening, right around the time that the New York Yankees were surging to a 2-0 game 6 lead by virtue of a Hideki Matsui homerun, Lighthouse Wrestling was in the process of getting it confirmed that 2x defending CHSAA Catholic State/2008 NYS DI Champion, Andrew Lenzi, had indeed officially come off of the market….Responding to a facebook message left for him, the two-time NYS finalist confirmed that earlier in the evening, he had contacted the University of Pennsylvania’s Head Wrestling Coach, Rob Eiter, to inform him that he had decided to make the Philadelphia based campus his home away from home for the next four years (commencing in the Fall of 2010)….Lenzi becomes the first recruit from the current senior class to formally announce his intentions to join the Qakers.  END_OF_DOCUMENT_TOKEN_TO_BE_REPLACED