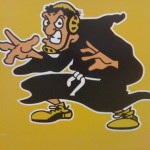 On Monday, February 15th, the Friars of St. Anthony’s High School put the finishing touches on what has been an unblemished season for the ages for the South Huntington based school, completing the triple crown (Dual Meet, League title, Catholic State) behind the individual efforts of seven champions. In doing so, the Toni Walters led team, which last won the CHSAA State title in 2002, dethroned the defending team champions, Monsignor Farrell, outscoring the Lions 286.5 to 225.5 to bring the hardware back to Long Island where it had been a mainstay prior to last season. END_OF_DOCUMENT_TOKEN_TO_BE_REPLACED