It was a great weekend for the Big Red. We had a doubleheader on Saturday, starting with a 1 p.m. match at Hofstra, and then culminating in a 6 p.m. Ivy League faceoff at Columbia. Over the course of the day, our guys only gave up eight offensive points. END_OF_DOCUMENT_TOKEN_TO_BE_REPLACED

It has been a while since my last musings, but that does not mean nothing has been happening in the Cornell wrestling world. As a matter of fact, we have been very busy and I am slightly surprised and disappointed that I have not heard many complaints about my silence.

It has been a while since my last musings, but that does not mean nothing has been happening in the Cornell wrestling world. As a matter of fact, we have been very busy and I am slightly surprised and disappointed that I have not heard many complaints about my silence. I can only surmise this means no one reads my ramblings or those who do are enjoying the break. For better or worse, however, I am back and here is the update.

END_OF_DOCUMENT_TOKEN_TO_BE_REPLACED 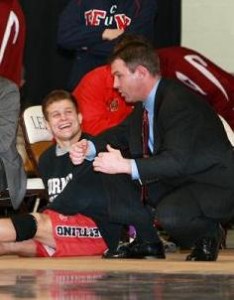 END_OF_DOCUMENT_TOKEN_TO_BE_REPLACED

What: #1 Cornell vs. #6 Central Michigan

A quote from one of my favorite movies of all-time, “Prefontaine,” stated that the protagonist’s drug was winning at everything. Apparently, this is a personal philosophy that Cornell University Head Coach, Rob Koll, also subscribes to. The owner/operator of the preseason #1 team in the nation, Koll continued his pursuit of the top-ranked recruiting class in 2011 today by getting a verbal commitment from 3x Missouri State finalist/2010 State Champion, Bricker Dixon, the #41 recruit in the current senior class. The Park Hill High School stud is the highest regarded of the quartet, joined by #65 Joe Rendina (Dundee, MI), #97 Caleb Richardson (Blair Academy), and #93 Duke Pickett (Woodberry Forest, VA)….The Big Red have also landed  twin 2010 NYS DII State Champions in Craig and Owen Scott (Palmyra-Macedon). END_OF_DOCUMENT_TOKEN_TO_BE_REPLACED

I like Cornell University Head Coach, Rob Koll; I really do. However, if he continues to make these recruiting press releases a daily ritual, than I am afraid I am going to have to end our friendship….While it goes without saying that the previous statement was obviously meant in good fun, the one thing that is not a joke is the amazing job that Koll and staff have been doing thus far in landing elite talent from the class of 2011. As the calendar switches to October and next month’s early signing period will be here before we know it, there has been no rest for the weary in Ithaca as seemingly every day a new blue-chip recruit is informing us that they have selected the Big Red as their college choice. Less than 24 hours after putting the finishing touches on the press release announcing that #65 recruit, Joe Rendina, has decided on the returning NCAA runners-up, I find myself experiencing a touch of deja vu as again I am back on my laptop to formally break the news that for the second straight evening, an InterMat top-100 recruit, #93 Duke Pickett of Woodberry Forest High School has given a verbal commitment to the Ivy League institution of higher learning. Pickett, a 2010 Virginia State Champion, becomes the third top-100 honoree and fifth overall student-athlete to pick (no pun intended) Cornell.  He joins Rendina, along with #79 Caleb Richardson and twin NYS DII champs Craig and Owen Scott. END_OF_DOCUMENT_TOKEN_TO_BE_REPLACED

Just 10 days after getting verbal commitments from a pair of NYS DII Champions in the persons of the Scott twins, Cornell Head Coach, Rob Koll had cause to celebrate again when 2010 Michigan State Champion, Joe Rendina, the #65 ranked recruit in the land according to InterMat, announced live on Wrestlingaddix.com that the Big Red had won the sweepstakes for his services.  The EIWA conference powerhouse beat out the hometown favorite Spartans of Michigan State (who in their own right have had an impressive start to the class of 2011 recruiting season), as well as the University of North Carolina, who represented the only other institutions to make the final cut on Rendina’s short list of schools. END_OF_DOCUMENT_TOKEN_TO_BE_REPLACED

The Banachs, the Brands, the Altons, and now the Scotts. For as long as I can remember, the sport of amateur wrestling has been no stranger to its fair share of historic tales involving twin brothers who have gone on to lead their respective schools to national prominence. For Cornell University Head wrestling Coach, Rob Koll, the hope is that there is magic in another set of siblings as late last night, Craig and Owen Scott broke the news on their facebook accounts that they have elected to verbally commit to the reigning EIWA team Champions/NCAA National runners-up. The brothers, who enter their senior campaign as both returning individual and NYS DII team champions, become the second and third blue-chip members of the class of 2011 to announce their intentions to continue their academic and athletic careers at the Ithaca, New York based campus. They are joined by Caleb Richardson of Blair Academy who several weeks ago become the first student-athlete to commit to Koll and his staff. END_OF_DOCUMENT_TOKEN_TO_BE_REPLACED

It was a great weekend for the guys. Everyone wrestled well and I am very happy with where we are at this point in the season. Obviously the competition is not as tough as it has been in the past but I still get nervous whenever we wrestle Penn at Penn. We used to have some very tough battles in the Palestra so it is nice to dominate the Quakers on their home turf. END_OF_DOCUMENT_TOKEN_TO_BE_REPLACED

Now that we have wrestled through the most rigorous portion of the season it is nice to have a few “lighter” matches leading up the EIWA tournament. Out of twenty matches wrestled, we had only one wrestler lose a match.

Now that we have wrestled through the most rigorous portion of the season it is nice to have a few “lighter” matches leading up the EIWA tournament. Out of twenty matches wrestled, we had only one wrestler lose a match. Unfortunately that same wrestler, John Basting, not only lost a match but suffered an injury in his final bout. I am not sure when he will return to the mats.

END_OF_DOCUMENT_TOKEN_TO_BE_REPLACED

What: #2 Iowa State vs. #7 Cornell University

END_OF_DOCUMENT_TOKEN_TO_BE_REPLACED

Coverage details of Iowa State wrestling at Cornell on January 31st at 1PM.

END_OF_DOCUMENT_TOKEN_TO_BE_REPLACED

Cornell had a full weekend of wrestling with Lehigh on Friday evening and the New York Intercollegiate Championships all day Saturday and Sunday. We tied #8 Lehigh 15-15 and won the NY States, crowning five champions.

We had a full weekend of wrestling with Lehigh on Friday evening and the New York Intercollegiate Championships all day Saturday and Sunday. We tied #8 Lehigh 15-15 and won the NY States, crowning five champions.

END_OF_DOCUMENT_TOKEN_TO_BE_REPLACED

They practice scrambling at Cornell; this is a certainty. If the finals of the 2009 Southern Scuffle on the campus of UNC-Greensboro taught us nothing else, it is that Big Red wrestlers have made an art out of countering their opponents’ offensive attacks and utilizing their scrambling ability to remain in control of matches at all times…If you need convincing, I suggest that tomorrow when the video hits the intermit, you check out the masterful job that true freshman, Kyle Dake, did in his 141-pound title bout against Minnesota’s Mike Thorn. A battle of two top-10 ranked wrestlers in the nation, Dake not only maneuvered his way out of a spladle-like predicament early in the first period, he also continually got the best of the not stop hit/react action that best described the final period of the title match…Trailing 4-2 to start the third period, the former 3x NHSCA National Champion, quickly scored the reversal to even the match. However, realizing that a Thorn escape could very well be all she wrote, the true freshman from Lansing, NY did whatever it took to avoid surrendering that make or break point…Dake’s efforts paid off as he successfully rode out remainder of the period, thus locking up the riding time point to claim the title by a score of 5-4. This victory was doubly special for the CU wrestler in that in addition to individual glory, the win served as the nail in second place, Minnesota’s coffin as the Big Red repeated as the team champions at the annual holiday tournament. END_OF_DOCUMENT_TOKEN_TO_BE_REPLACED

Good afternoon Lighthouse Wrestling readers….As many of you already know, I love being a wrestling journalist. Next to spending time with my family, having the privilege of covering all of your sons, daughters, godchildren, friends, etc in their athletic endeavors is my greatest source of joy and euphoria. It would be no understatement to say that I relish the opportunity to write 99.9 percent of the stories that I pen…Unfortunately, today is the first time that this feels like a job rather than a labor of love. This is the most difficult piece of my tenure with LHW because it is the announcement of news that I hoped that I would never have to report. It is with complete sadness in my heart and tears in my eyes that I have the burden of conveying to you that after nearly two years of the gutsiest/bravest fight I’ve ever seen, Adam Frey has lost his battle with cancer…Adam would have turned 24 in a few weeks. END_OF_DOCUMENT_TOKEN_TO_BE_REPLACED

They say that the measure of a man is the way that he responds when things are not going his way. For Blair Academy Head Coach, Jeff Buxton and his team, it is unlikely that heading into day #2 of the Beast of the East tournament, they envisioned themselves in third place in the team standings, trailing fellow perennial powerhouses, Central Dauphin (3x Pennsylvania AAA State Champions) and Wyoming Seminary. However, rather than sulk, the Bucs refocused themselves and got down to business, putting together one of the most impressive second day efforts that I have ever seen in a tournament on either the scholastic or collegiate levels… END_OF_DOCUMENT_TOKEN_TO_BE_REPLACED