Last week, Lighthouse Wrestling was proud to promote the Sprawl & Brawl Duals, organized by the Journeymen Wrestling Club, under the leadership of Frankie Popolizio. However, as deep in talent as that event is, the 2010 Northeast Duals, also sponsored by the JWC, might just be the best accumulation of talent in one place at one time this early into the 2010/2011 season…With a field consisting of seven of the nation’s top 25 teams (13 of the top 50), LHW and Journeymen have one suggestion for you, MAKE IT A DOUBLE, by being in attendance for both of the JWC’s premier events. END_OF_DOCUMENT_TOKEN_TO_BE_REPLACED 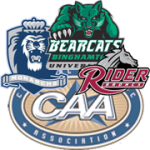 But which university snatches up that team championship is still in doubt. Three teams have legitimate shots at winning the conference tournament: Old Dominion, Binghamton, and Rider. The tournament will be held on Rider’s campus in Lawrenceville, N.J., March 5-6 END_OF_DOCUMENT_TOKEN_TO_BE_REPLACED