A year later, a year stronger, and determined to exorcise the curse from their wrestling souls, the Pride reclaimed the CAA title ripping away the title from the Binghamton Bearcats, the team who terminated their championship streak in 2010 at 9 straight, and qualified 7 athletes for the championships in Philadelphia PA. 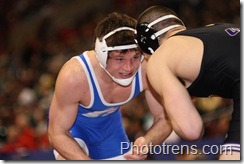 In the 2010 championships in Omaha Nebraska, the Hofstra Pride wrestling team sent two grapplers to compete for All-American titles.  Their stranglehold on the CAA conference title was smashed when their top athletes fell to season ending injuries.   Unlike season’s past when the Pride would wrestle deep and return with hardware, they exited the tournament on the first day after having compiled a 1 and 4 record.

A year later, a year stronger, and determined to exorcise the curse from their wrestling souls, the Pride reclaimed the CAA title ripping it away from the Binghamton Bearcats, the team who terminated their championship streak in 2010 at 9 straight, and qualified 7 athletes for the championships in Philadelphia PA.

There is no such thing as an easy round in the national tournament.  The athletes competing at the D1 level tuned their talent to a perfect pitch.   Most have competed since elementary school and reached the highest of distinctions in high school.  To qualify for the tournament, the wrestlers had to have placed among the top of their peers in conference tournaments.  To reach this moment the grappler has proven themselves to be the best among the best.   So it was no surprise, though disappointing, to see 2 of the Pride wrestlers advance to round 2 of day one.

For the team that overcame numerous setbacks to reach this point, they weren’t prepared to call it a day.  In the first round of the wrestle backs, 4 of the 5 Pride wrestlers advanced to the next day:  Steve Bonanno, Vicente Varela, Mike Patrovich, and Ben Clymer.   In the championship bracket, Lou Ruggirello and Paul Gillespie advanced into the quarterfinals.

Head coach Tom Shifflet commenting on the day’s performance said, “They trained (the Pride wrestlers) well since their conference and came prepared. We had a slow start this morning, going 2 and 5, but the guys bounced back in a positive way and kept themselves in contention to become All-Americans, and that’s what we want.“

After pinning his first round opponent in :57, Ruggirello faced off against his CAA conference title opponent Kyle Hutter of Old Dominion.   The mark of a great competitor is when they repeatedly defeat a strong opponent.  Ruggirello soundly defeated Hutter 5-1 to advance to the quarterfinals.  “The key for Lou is getting that first takedown.  I don’t believe there’s a kid in the tournament who is going to defeat him if he gets that first takedown,” said Shifflet.

Next up in round 2 was PJ Gillespie.  In the first round Gillespie knocked off the sixth seed David Bailey (OKST) in sudden death victory.  Gillespie pushed the action for the first seven minutes penetrating at will with an inside single leg, but Bailey’s strong defense made it a difficult task to convert it for points.  In the SV period, Gillespie did what worked in regulation round: he shot the inside single and penetrated deeply. Only this time, Baily melted like butter giving Gillespie the win.  “PJ was pushing forward, attacking, and controlling the tempo of the match.  When he’s doing that, he’s very difficult to beat,” said Shifflet.   Gillespie advanced to the quarterfinals by defeating Peter Yates (VATECH), who upset the #11 seed, with a 5-2 decision.

After suffering a first round loss to Ben Kjar(UTAHV) by a 5-2 margin, it appeared that Steve Bonanno was about to exit the day 0-2.  With less than a minute left in the third period and behind 4-1, Bonanno scored a single leg takedown and immediately locked a tilt for 3 points moving ahead 6-4.  After letting up an escape, he held on to a 6-5 victory.   “Steve keeps himself in every match; he’s very dangerous on top, and if he get’s your wrist, you’re in big trouble,” said Shifflet on the win.

Next up was Vicente Varella.  After an uninspiring first round losing a 9-3 decision to Michael Magrum(ORST), Varella wrestled with new spirit.  From the opening whistle he defeated Mike Koehlein (NEB) by major decision (12-1) with a flurry of leg attacks.  “You can’t sit around; you can’t mope.  You can’t feel sorry for yourself.  They have to pick themselves up and go out and perform.  That’s what he did, and it’s what the others did,” said Shifflet of the inspired wrestle back performance.

With his first round opponent answering every offensive attack, Ryan Patrovich lost a first round decision to Luke Manuel(Purd) by a 5-2 margin.  Patrovich rebounded in the wrestle backs with a 3-1 decision over Justin Zeerip(Mich). "A few of the guys were just not in their first match. It was almost like we were frozen. He came back.  Being a senior, it’s nice to get those quality wins,” said Shifflet.

Ben Clymer squared off with Ryan Loader (UNI), the number six seed at 184lbs.  After trading an escape each in the 2nd and 3rd periods, the bout went into overtime knotted at 1.  Clymer goes ahead in the tie-breaker with an escape, but Loader answered with an escape and a takedown of his own  in the final period to secure the 4-2 victory.  Clymer answered the first round loss with a 5-1 victory over Corey Peltier(MD) to advance to day 2. “He kept his opponent (Peltier) on his heals, and that’s what you have to do in this tournament.  He did a nice job riding and scoring the reversal in the 3rd period to seal the match.” said Shifflet.

In the only loss of the second round and wrestle backs, Paul Synder suffered a narrow 3-2 loss to J. T. Felix (Boise).  “Win or lose I liked the way Paul Schneider has developed. He initiated good shots and he’s exploding from on bottom. You don’t want to see him lose a match like that, but that’s something he can build on next season,” said Shifflet.

“They guys will get a good night’s rest. The first day is over.  Everything has settled down a bit, and you know where you stand.  Now it’s about going out and wrestling hard for 7 minutes.  We have great opportunities heading into tomorrow, and we want to take full advantage of that,” said Shifflet.