Before an enthusiastic crowd at Stony Brook University Arena on the evening of February 14th, CJ Labate of Commack stepped out of the shadows and into the spotlight to declare his presence to the New York wrestling community. 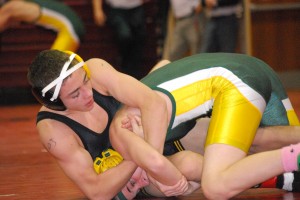 Before an enthusiastic crowd at Stony Brook University Arena on the evening of February 14th, CJ Labate of Commack stepped out of the shadows and into the spotlight to declare his presence to the New York wrestling community.  On his journey to this auspicious moment, CJ slayed five of six challengers by pin fall and wrestled a total of 22.5 minutes out of a maximum 36.

All that separated Labate from a Section XI title was fellow sophomore Chris Powers of Mount Sinai and an impressive record of 33 wins and 2 losses.  One minute and 22 seconds later, Labate pinned his challenger to emerge the 2011 champion and to contend for a state title.

Labate, a 15 year-old sophomore from Commack High School, was the only Section XI finalist to defeat his opponent via pin fall.  Quoted on MSG Varsity: “CJ sent the crowd into a frenzy with his pin in the Championship finals.”  His victory was a surprise to many, but not to those who have been following him throughout the season.

In a sport where impressive accomplishments rarely go unnoticed, Labate wrestled through the 2010-11 season in anonymity.  Compiling a 25 – 0 record and registering 21 pins, he suffered one loss to highly ranked TJ Fabian when competing up at 112 lbs.  Entering the League I Tournament as the 4th seed, Labate emerged champion of “The Toughest League in the State” while dispatching all of his opponents by pin fall. 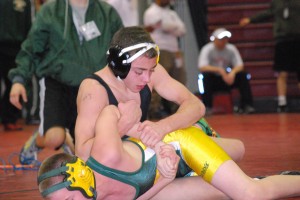 A week later Labate jumped into the Section Tournament again as the 4th seed.  After wrestling a total of 7 minutes and 23 seconds, he faced off against his most formidable opponent yet: Travis Passaro, the number one seed.  Labate edged out his semifinal opponent by the laser thin margin of 3 – 2, the only opponent to go the distance with Labate.

Labate’s fans readily acknowledge his championship potential.  World champion and 15x national champion and Technical Edge Wrestling Coach, TJ Hill, considers CJ his prized pupil.  “CJ is even better at freestyle,” says Hill.   “He asks the most questions at practice, and can pin anyone from any position.  There is no defense to his moves.”  Commack’s head coach, Mike Guercio, echoes that sentiment:  “CJ is a true testament to our team motto, ‘Victory goes to those who are willing to pay the price.’ CJ’s work ethic is unbelievable!”

Throughout the season, both opponents and coaches alike locked their focus on the center circle whenever “that CJ kid” entered the ring.  After watching CJ wrestle, MSG Varsity producer, Archie Snowden, commented “…that Commack kid, CJ…it is not human the way he has been beating his opponents, this year.”

Although usually quiet and unassuming, Labate seizes command of his matches, bringing power and intensity that raises the roar of the crowd to thunderous decibels.  Each time CJ steps off the mat, another pin, another victory to his name, he does not outwardly celebrate, wave to the crowd or pump his fists.  Instead, he walks off with a knowing, steely gaze, silently confident. 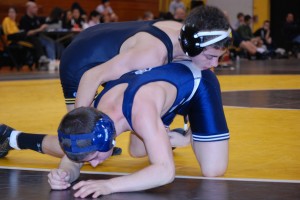 Will CJ Labate become the first Commack Wrestler in school history to capture a New York State title at the 2011 NYSPHAA Wrestling Championships?  One thing is certain:  Labate has emerged a formidable challenger for the 103lbs state title.  To underestimate him is to suffer his wrath.  If you doubt this, just consult with anyone of the pile of slain opponents whose matches ended before they knew what hit them.

4 thoughts on “CJ Labate Pinning His Sights on a Title”