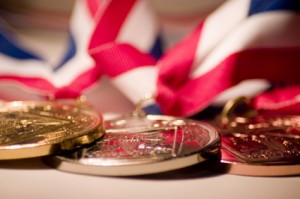 Kyle Kelly (sec. 4 Chenago Forks) is the returning forth place state place-winner. But keep an eye on Nick Piccininni of section 11 Ward Melville. Dylan Realbuto of sec. 1 – Somers won the Eastern States. Kelly and Robert Person (sec. 8 pound champ from Bellmoe JFK) clash in what could be an interesting first round match.
FINALS PREDICTION: Piccininni (11) or Kelly (4) vs. Realbuto (1)

Mark Raghundan is the returning 3rd place finisher at 96 lbs. in 2010. However, temamate Krishna Sewkumar defeated him in the section 8 final. Mike Parise of Brewster – sec. 1 returns after taking 5th at this weight last year. But he also was beaten in his section final by Jimmy Duckham of Arlington HS. Brandon Lapi of sec. 2 – Amsterdam took 4th in the Eastern States Classic behind Parise. CJ Labate of Commack sec. 11 can be a sleeper in this weight.
FINALS PREDICTION: Duckham (1) or Parise (1) vs. Raghunandan (8)

112 lbs. also has 2 returning place-winners. Senior Sean McCormick of sec. 4 Johnson City took 5th at this weight last year and he is the favorite. Asher Kramer of sec. 1 – Suffern took 4th at 103 last year , but he lost in his section final to junior Sam Speno of Fox Lane. Speno of sec. 1 – Fox Lane beat McCormick 1-0 at the Eastern States. Cory Rasheed of sec. 11 – Longwood beat Speno in that same tourney and took 2nd. Sean McCabe of sec. 11- Connetquot beat Rasheed for a Suffolk County title. Lots of talent at this weight.
FINALS PREDICTION: Rasheed (11) vs. McCormick (4) or McCabe (11)

The definition of a banner weight is the 119 pound weight class in Albany this year. The weight returns 2 champs and a 2nd place finisher. Nigel McNeil of sec. 11 – Huntington was 1st at 112 lbs. last year and Al Dierna (sec. 5 – Wayne) was the champ at 103 pounds in 2010. Joe Barbato of sec. 8 – Wantagh took 2nd at 103 pounds to Dierna last year. Will Montgomery of sec. 8 – Seaford defeated Barbato in his section semifinal and will be a force to be reckoned with in Albany. Nick Oliveto of sec. 1 – Suffern won the Eastern States. Dierna took 5th.
FINALS: Oliveto (1) or Montgomery (8) vs. McNeill (11)

The 125 pound weight class has only one returning place-winner and he lost in his sectional tournament. Alex Gomez placed 5th at 119 lbs. last year, but lost to sec. 11 champion Anthony Abidin of Half Hollow Hills East. Jimmy Morris of C-St. Anthony’s was a place finisher 2 years ago. Max Miller of sec. 2 – Shenendehowa won the Eastern States.
FINALS: Abidin (11) vs. Gomez (11)

130 lbs. is an extremely competitive weight class with 4 returning place-winners and one of them is a wild card. Steven Rodriguez of sec. 1 – Fox Lane was 3rd at 125 last year and Vin Fischetti of C- Monsignor Farell was 5th at that same weight. Tim Schafer of sec. 6 – Lancaster was 4th at 112 poounds last year. Malik Rasheed of sec. 11 – Longwood placed 2nd at 112 lbs in 2010 but took 3rd in his section behind teammate Casey Brice and section 11 champion James Dekrone of John Glenn. Dekrone was runner-up to Rodriguez in the eastern States Classic. I’d look for a rematch of the Eastern States finals. The Perez (8)/Fischetti (C) first round match is a good one. The winner of that faces Casey Brice (11) to the semfinal. see who advances and should meet Dekrone in a solid semifinal match.
FINALS: Dekrone (11) vs. Rodrigues (1)

At 135 pounds Casey Lanave of sec. 4 – Chenango Forks returns as a 3rd place finisher from 130 last season. But he lost to wild card Dave Almaviva of sec. 2 – Shenendehowa this season. Section 2 champion qualifier Jonathan Clemente of LaSalle should be watched along with Ken Meinsen of sec. 11 – John Glenn and Bob Dierna of sec. 5 – Wayne. Brian Realbulto of sec. 1 – Somers won a wild match over Quinton Murphy (D2 champ) in the Eastern States Classic final. Jamel Hudson of C – St. Anthony’s has a tough first round match against Connor Bass of sec. 11 – Westhampton Beach. If he gets by that match his quarterfinal match with Bob Dierna should be a good one.
FINALS: Realbuto (1) vs. Meinsen (11) or Alamaviva (2)

140 pounder Lew Cucchiara of sec. 5 Gates Chili will be tough to beat as a 3rd place finisher at this weight last year. But he is a wild card from his section behind undefeated Joe Bonaldi of Greece Olympia. Bonaldi placed 4th at 135 pounds last season. Adam Lepkowsky of sec. 11 – Hauppauge was a runner-up at the Eastern States Classic to Derak Heyman (D2 champ). Connor Sutton of sec. 2 – LaSalle finished 3rd just ahead of Jim Carrucci of Shenendehowa (also from section 2).
FINALS: Bonaldi (5) vs. Cucchiara (5)

A trio of returning place-winners from last year’s 140 pound weight class settle in at 145 pounds this year. James Kloc of sec. 6 – Iroquois was 2nd, Dylan Palacio of sec 8 – Long Beach was 4th and Tory Cain of sec. 5 – Wayne was 6th. Suffolk County has 3 wrestlers at this weight so look for at least one of those 3 wrestlers to place top 6. Palacio defeated Cain 2-1 in the finals of the Eastern States Classic.
FINALS: Kloc (6) vs. Palacio (8) or Cain (5)

Kyle Wade of sec. 11 – Islip was 2nd at this weight (152 pounds) last year and is the heavy favorite to win it all in 2011. Wade defeated Vin Grella of sec. 1 – Beacon handily in the finals of the Eastern States Classic. Frank Affronti of sec. 5 – Wayne placed 4th in the same weight. Irvin Buck has only one loss this year…a 15-10 decision to D2 champion Chris Nevinger.
FINALS: Wade (11) vs. Buck (6) or DeJesus (8)

160 pounds is deep with talent this year with Mitchell Wightman of sec. 9 – Warwick Valley the favorite as the only returning place-winner. Wightman was 6th in Albany at 145 pounds last year. Kyle Diesel is a wild card from section 9, and Jermaine John of sec. 8 – Bethpage is a Nassau County champion with one loss this year. Also look for Patrick Jennings of sec. 11 – Longwood to be in the mix. Jennings defeated Diesel 3-1 for 3rd place at the Eastern States.
FINALS: Wightman (9) vs. Jennings (11) or Diesel (9)

The 171 pound weight class seems to be wide open in Albany this year. There are no returning place-winners at this weight. Joe Shell of sec. 2 – Colonie placed 4th at the Eastern States. Sean Prell of sec. 9 – Warwick Valley placed 5th there by a decision over Chanse Menendez of sec. 11 – Hauppauge. Matt Lashway of sec. 2 Queensbury placed 8th at the Eastern States. Childs of sec. 5 Brockport has some nice wins this year and gets the 1st seed.
FINALS: Childs (5) or Berkowitz(1) vs. Shell (2) or Prell (9)

Joe Kavanagh of Wantagh sec. 8 leads the way at 189 pounds as a returning 2nd place finisher. 2nd seed Joe Cimmings of sec. 1 Nyack has only one loss this season and that is to sec. 2 Shenendehowa’s Tony Fusco who is in the opposite bracket along with sec. 11 Joe Giaramita of John Glenn. Frank Abbondanza of sec. 11 Mt. Sinai is in Cummings’ semifinal bracket. Scott Bova of sec. 1 Arlington lost close twice to Cummins and is in the quarterfinal bracket with Abbondanza. Junior Jake Kelly of sec. 6 Niagara Wheatfield has some solid wins this year in a 43 win season and could be a dark horse place-winner at this weight.
FINALS: Kavanagh (8) or Fusco (2)/Giaramita (11) vs. Cummings (1) or Abbondanza (11)

215 pounds is another weight with no returning place-winners. 1st seed Jake Barnhart of sec. 5 Penfield lost only twice this year…once to defending D2 champ Nich Gwiazdowski and another to highly regarded PA wrestler David Quackenbos (committed to Lehigh). This weight seems to be wide open however as Barnhart, Andrew Smith of sec. 9 Port Jervis and Mike Almaviva of sec. 2 Shenendehowa have wrestled close this season.
FINALS: Barnhart (4) vs. Almaviva (2) or Smith (9)

285 pounds returns David Ng of sec. 8 Plainedge who was 3rd in Albany last year at 215. He is the favorite as the only returner who finished on the podium at the NY State tourney last year. Alex Tibbles of Indian River – sec. 3 hasn’t lost this season and is seeded 2nd. Jonathan Desir is seeded 4th and has a win of Cole Lampan of sec. 2 Shenendehowa (as does Ng). The Ng – Desir semifinal should be a good one.
FINALS: Ng (8) vs. Tibbles (3) or Stanley (9)

Follow Lighthouse Wrestling as we Cover the Division One championships throughout the weekend at http://live.lighthousewrestling.com.