It has been a while since my last musings, but that does not mean nothing has been happening in the Cornell wrestling world. As a matter of fact, we have been very busy and I am slightly surprised and disappointed that I have not heard many complaints about my silence.

It has been a while since my last musings, but that does not mean nothing has been happening in the Cornell wrestling world. As a matter of fact, we have been very busy and I am slightly surprised and disappointed that I have not heard many complaints about my silence. I can only surmise this means no one reads my ramblings or those who do are enjoying the break. For better or worse, however, I am back and here is the update.

From December 13-20 we hosted the US National freestyle team at the Friedman Wrestling Center. This was a great opportunity for many of our guys to test their mettle against some the country’s very best wrestlers. I have to admit I was terrified that someone would get hurt, but I felt the risk was worth the reward, and thankfully everyone survived unscathed. When the team returned after the winter break, we headed down to Greensboro, NC for the Southern Scuffle. The Scuffle has developed into one of the toughest tournaments in the land. We were without the services of Mike Grey and DJ Meagher, but we still managed to bring home our third consecutive title by tying Penn State for first place.

I was pleased with the overall team performance. The guys wrestled hard and wore the Cornell “C” with pride. Here is a weight by weight breakdown: 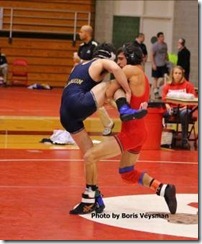 125 Frank Perrelli (6-2, 5th) Frank earned fifth in a brutally tough weight class featuring eight top 20 ranked wrestlers. Frank found ways to win some very close battles. What pleased me most about Frank’s performance was his ability to ride his opponents for more than a couple of seconds, which is historically about all Frank is willing and/or able to ride. We have been and we will continue to encourage Frank to strengthen this aspect of his wrestling.

133 Joe Stanzione (3-2, DNP) Unlike Frank, Joe found ways to lose two close matches. Joe is a great technician, but struggles with wrestlers with unorthodox styles. He needs to keep working on his takedown finishes. Once he gets a little better in this area, he will enjoy a great deal more success. Mike Grey will return to action against Iowa State.

141 This weight class has three very good, struggling wrestlers. I do expect that one of these young men will provide Cornell wrestling with a great deal of production by the end of the year. Hopefully that person will not make me wait too long! Corey Manson (0-2, DNP); Mike Nevinger (1-2, DNP); Chris Villalonga (2-2, DNP) 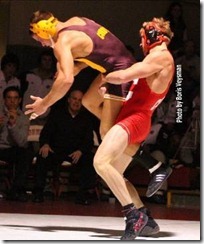 149 Kyle Dake (6-0, Champion) Kyle had been out since November 19 and is slowly working himself back into wrestling shape. I have been told that he did not look good, but since I have never seen anyone look bad with his arm raised after a match, I have to disagree! Ryan Dunphy (1-2, DNP)

165 Justin Kerber (6-0, Champion) Justin is a perfect example of how important confidence and health are to an athlete’s performance. Last year, Justin’s record was 6-6 after the National Duals. He suffered an early season injury and as a result wrestled poorly, lost a few matches, and lost all confidence in his abilities. On the other hand, this year, he is 21-1 going into the National Duals and is one of our most dominant athletes. He is not significantly stronger or technically more proficient than last year. The difference is he believes and expects he will win every time he steps on the mat. Because of this attitude, he hits his moves with conviction and authority. He has had close matches this year, but in all of those matches, somehow found a way to win. Cody Hucheson (0-2, DNP)

174 Mack Lewnes (5-1, 3rd) Mack wrestled well in all of his matches except his semifinal bout. In that bout, he failed to make any adjustments defensively or on bottom. His opponent did a great job of neutralizing Mack’s unorthodox leg defense and bottom work. Generally, I am not a fan of “losses to learn a lesson”, but I sincerely believe this match is an exception to that rule. I am thankful to have the advantage of formulating a more effective game plan, so if he meets this opponent again, the outcome will not be repeated. Mike Alexander (2-2, DNP)

184 Steve Bosak (4-1, 2nd) Steve suffered his first loss of the season. I am extremely proud of how Steve is wrestling this year. He pushes himself as hard as is humanly possible throughout the entire match. This style of wrestling will get him ready for the NCAAs, where he will be richly rewarded. Colin McDonald (0-2, DNP)

197 Cameron Simaz (5-0, Champion) Despite wrestling with an injured knee and falling off the elevated podium twice during the finals, Cam found a way to win the championship, allowing the Big Red to capture its third straight Southern Scuffle crown. The bad news is, due to his injury, Cam is questionable for the National Duals.

285 We have been looking for a breakout performance at this weight, but neither heavy was able to give it to us at the Scuffle. Like at 141, we need one of these big guys to put more than a couple of points on the board for the Big Red. Oney Snyder (1-2, DNP); Stryker Lane (2-2, DNP)