The appearance of Brooklyn Tech High School’s over the weekend match was significant for the Beat the Streets Wrestling initiative in an historical perspective. 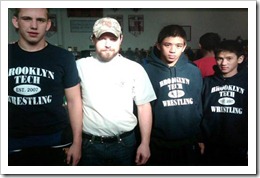 The appearance of Brooklyn Tech High School’s over the weekend match was significant for the Beat the Streets Wrestling initiative in an historical perspective.

“ According to my book, Gotch to Gable, the first Iowa state high school tournament was held in 1921 in Ames. A total of 20  teams participated in the meet and the winner was Cedar Rapids Washington High School — which was coached by a teacher who was assisted by two PRO wrestlers — the legendary Farmer Burns (who was born in a log cabin about 40 miles east of Cedar Rapids) and Jack Reynolds, who was the world welterweight champion at the time and was working on the railroad in Cedar Rapids.

Long Island wrestling under the leadership of Frank “Sprig” Gardner began in 1933 at East Hampton, Long Island and one year later he accepted the position of Director of Athletics and head wrestling coach at Mepham HS in Bellmore, Long Island.

The significance and the influence of Sprig’s model for the growth and expansion of wrestling in New York State and the country still continues long after his death in 1975.

On the granite stone is imprinted the following:

“His success story is without parallel. A graduate of Franklin & Marshall, without wrestling experience, he organized his first team at Mepham in 1937 in an abandoned elementary school converted to a high school. Except for three years in World War II as a lieutenant commander on an aircraft carrier, he remained at the helm until 1958.

In 1946, Baldwin High ended a Mepham streak of 100 consecutive victories, yet that loss was merely an interlude.  Mepham would not fall again until 1955, when a one-point loss to Amityville ended a string of 130 triumphs.

Sprig and his Mepham wrestlers were featured in a five-page article in Life Magazine during the early 1950’s. Two of his protégés, George Creason and Sid Nodland, won National AAU championships while still in high school. Eighteen won Eastern Intercollegiate titles.

Many have attained success in both athletics and business. Innovation was a key to Gardner’s success. His drill system revolutionized the sport. He shared his concepts with books and articles.

In recognition of his fabulous coaching career, and a lifetime of leadership in the development of wrestling, Frank “Sprig” Gardner is honored as a Distinguished Member of the National Wrestling Hall of Fame.

Penn State University in 1953 is the only eastern team to win an NCAA team Championship.  They scored 29 points.  Team points were only scored by the place winners during those early years and 19 of those points were scored by Mepham wrestlers.

Several times at the Eastern Intercollegiate Championships,  Mepham wrestlers from four different colleges finished in the top 1-4 placements in one weight class.

Sprig’s influence continues today with many, many high school and college coaches who were trained by former Mepham wrestlers, coaches and continues on today with the children of those coaches becoming coaches.

What a great man…he came to my high school in 1952 while the suburbs were booming with many returning servicemen fleeing New York City for the countryside of Long Island.

The Beat the Streets-New York City initiative followed Sprig’s in its structure, philosophy and basic skills program created by him along with Charlie Spiedel and Ray Swartz in the Naval Training book.

Sprig would call upon every new high school that was being erected and brought over his team, held an assembly and went through the values of wrestling by teaching and drilling the basic skills with his created drill system.

After seeing Sid Nodland and Dickie Dose, two of his returning Long Island Champions, doing the skills and drills…. that was it for me.

The Beat the Streets- New York City initiative followed the model created by Sprig in its structure, philosophy and basic skills program along with Charlie Spiedel and Ray Swartz in the Naval Training Book.

The middle school plan was expanded in 2007 with the Partnership Agreement with the Department of Education by implementing 45 more high schools and 60 middle school teams.

Lastly, we are planning a project with Lighthouse Wrestling to shoot a video of the life of Frank “Sprig:” Gardner while some of us remain alive.

Pascal Perri, Hall of Fame NCAA Official, with all the Hall of Fame coaches he taught like Bob Bury, Dr. Vince Zuaro, Jerry Seckler, Don Jackson, John Schaefer, John Walters, Walter Stewart and tons of former wrestlers, officials and coaches today will advocate the man’s influence on the past 3 generations.

It will be a lasting tribute to a really great man.