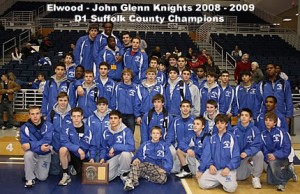 by Tom Giaramita
When the 2010-11 John Glenn Wrestling team enters there first competition on December 11th at the Bethpage tournament, all eyes in the State will be looking and hoping for “The Big Drop Off “…

After winning the past two Section XI Division 1 County Titles, last year’s NYS Dual Meet Championship and running off a 59 match unbeaten streak the question that many observers are asking is, “Is it over?” And many in the wrestling community think it might be after losing 7 starters, 6 who were All County performers, including NYS Champion Nick Meinsen and 2 x All State talent Nick Terdick.

The mood in the Knights practice room seems to think otherwise and seems determined to prove the pundits wrong. The team has already declared that winning a 3rd straight Suffolk County title is within reach, and so the Knights “Quest to Three-Peat has begun!”

The Knights have a strong senior group that is spearheaded by pair of ferocious pinners in 2 x All County and 2010 State Qualifier Joe Giaramita (189lbs) and All County performer Vinny Punzone (119lbs). The pair combined for a total of 45 pins last season! Both wrestlers are poised to make some noise in the State tournament in February. All County returnee Kevin Massa (152lbs -160lbs) also looks to earn a trip to Albany after last years break out season. Ken Meinsen (135lbs-140lbs) and Mike Pinto (285lbs) both League runner-ups in 2010 are both in the mix to win there respective weight classes. Brian Shankman who placed 3rd in the League tournament should be steady at 215lbs, and Luke Prohaske (160lbs-171lbs) and Kevin Pramberger (145lbs-152lbs) will try to hold down the fort in there weight classes.

The Knights have a very formidable junior class led by returning All County wrestler James Dekrone. Dekrone (130lbs-135lbs) who is looking to grab his first County title, put forth an exceptional off season. James wrestled in over 70 matches and earning All American honors in the Sophomore Nationals. Talented returning All League wrestler Brice Sinisgalli (103lbs-112lbs) is hoping to put it all together in 11’. Sam Rachman who was also All league in 10’ (125lbs-130lbs) is a veteran wrestler who is looking to have a break out junior season. The Coaches are expecting big things from Juniors Nick Bellanza (160lbs-171lbs) who also had a busy off season and Nick Princiotta (135-140lbs) who had a strong off season.

Solid Sophomore and 2009 All County wrestler Kenny Massa (119lbs) hopes to get back on the podium after missing the cut in 2010. Rugged Nick Lalota (119lbs-125lbs) should see some action this year as well. Talented freshman Chris Damico (96lbs-103lbs) and hardworking 8th grade call up Will Gutekunst (96lbs) should keep things respectable at the lower weights.

Both Coaches agree that there is a lot of work to be done with this team but feel that they have enough talent to be in the mix to win it all come County Championship time .