Last season was a rough one for the Hofstra University wrestling program. Hit hard by a number of season-ending injuries to key starters, the Pride failed to have any wrestlers earn All-American honors at the 2010 NCAA Division I championships. 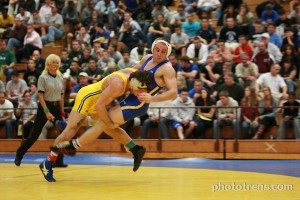 Last season was a rough one for the Hofstra University wrestling program. Hit hard by a number of season-ending injuries to key starters, the Pride failed to have any wrestlers earn All-American honors at the 2010 NCAA Division I championships.

However, in an interview for LighthouseWrestling.com, head coach Tom Shifflet said, “The past is the past.”

“Everyone in the program is thinking positive, thinking about what we want to do,” continued Shifflet, about to start his fifth season at the Long Island-based school after having served as an assistant coach at Georgia State and Cornell University, then as the head coach at University of North Carolina-Greensboro for four seasons prior to taking the helm of the Pride wrestling program.

The Hofstra athletic department appears to be optimistic about the future of the program, too. In late September, Shifflet was granted a four-year contract extension to continue as head coach through the 2013-14 wrestling season.

It was the best of times… 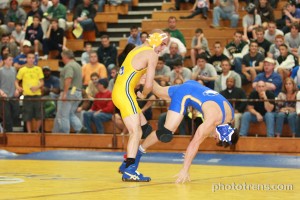 Since coming to Hofstra in May 2006, Tom Shifflet has ridden a roller coaster of highs and lows. “In the past four years, we’ve been able to beat No. 1 ranked Minnesota my first year, finish as high as seventh in the country (at the 2007 NCAAs),” said the Buffalo-area native.

Shifflet’s initial season for Hofstra seemed to be nothing but highs. In addition to the accomplishments already mentioned, the Pride also could claim an impressive 18-4-2 record, seven CAA (Colonial Athletic Conference) individual champs including the CAA Wrestler of the Year and the Rookie of the Year, and four NCAA All-Americans. For Shifflet’s efforts, he was named the CAA Coach of the Year.

It was the worst of times… 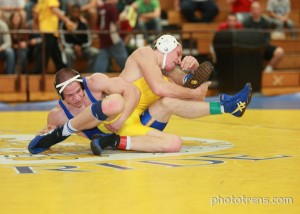 By contrast, the 2009-10 season was much more challenging. The team was decimated by injuries to starters in three weight classes. At 125 pounds, Steve Bonanno dislocated his elbow at the start of last season. Justin Accordino – Hofstra’s starter at 149 – blew out a knee after just four matches. And, at 174, Ryan Patrovich suffered a torn ACL in January after compiling a 16-7 record that season. As coach Shifflet put it, “We lost our best guys to injuries – season-ending injuries.”

A fourth starter – Lou Ruggirello – had redshirted for the season after having held the 133-pound starting role for the three previous seasons, winning three consecutive CAA conference titles.

Having four starters out of the lineup had a profound effect on the program. Hofstra finished last season with a 6-12-2 record.

In looking back at the previous season, Shifflet said, “One thing led to another. Being a private school, it’s hard to build depth here. It’s important for us to stay healthy.”

“When some of your top guys are out, it affects the other guys who are still wrestling.”

And not just in the way one might expect in terms of giving up starter-caliber athletes with considerable experience in four key weight classes… but in deeper ways that struck at the core of the program.

“People reading about the injuries on the forums and on Facebook, then commenting on them, really can affect team attitude,” said Shifflet. The Pride coach cited a specific example: “There were rumors going around about Hofstra dropping wrestling. The school had dropped football. We started getting phone calls, ‘Why are you dropping wrestling?’ I spent a couple days dealing with those rumors, rather than on recruiting.”

“Coupled with a bad season, people put two and two together and got it wrong. People don’t understand how these kinds of rumors affect the program and the wrestlers.” 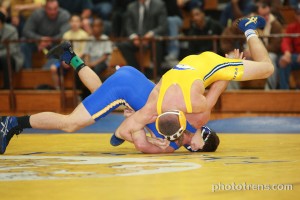 “Last season, our staff was in a different mode, trying to get things back under control,” Shifflet disclosed.

This season, the Pride head coach believes the team has reached a turning point, thanks to the efforts of the coaches and the wrestlers.

“It all starts with the athletes, instilling a winning attitude,” said Shifflet. “Most of my starters stayed the summer, working out.”

“The coaching staff has worked to enhance our depth.”

“Everyone in the program is thinking positive, realizing what we have to do,” the coach continued. “Build up those natural leaders who will lead the entire team.”

Key to greater success for the 2010-11 season is the realization of what Hofstra has accomplished in the past.

“We’ve been a top ten program in the past. We want to see that happen again.”

“We haven’t had an All-American in two years,” said Shifflet, a three-time All-American himself for Edinboro University. “We have guys on our team who can do that.”

What’s the preseason forecast for Hofstra for the 2010-11 season? WIN (Wrestling Insider Newsmagazine) has the Pride tied for 36th in its Tournament Power Index, ahead of programs such as Cal Poly, Michigan State, Harvard, Rider, and Drexel. What’s more, the magazine predicts Hofstra will place second at the 2011 CAA conference championships, right behind Binghamton.

Among major amateur wrestling websites, Hofstra is ranked 18th by D1CollegeWrestling.net, and 34th by InterMat. (Hofstra was not listed among the top 20 teams by TheOpenMat.com, nor in WrestlingReport.com’s top 30.)

Solidifying the starting lineup for 2010-11 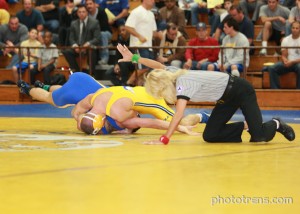 In the interview for this article – conducted before the wrestle-offs, held in late October – coach Shifflet was excited about the prospects for the new season, buoyed by a mix of proven starters, and some new faces, too.

“We’ve got a couple transfers – Vince Varela, from Arizona State, and Zach Clemente, who had wrestled at 149 at University of Virginia… We’re also looking forward to having Cody Ruggirello, a true freshman, in our lineup.” (Cody is the younger brother of Lou.)

Now that the wrestle-offs are history – and Hofstra’s season is already underway – here is the starting lineup, with individual rankings from some amateur wrestling websites: 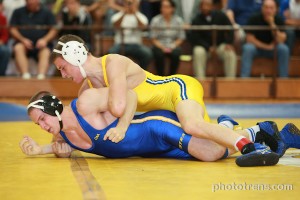 Shifflet admitted that the competitive environment in NCAA Division I wrestling is tougher than ever.

“Take Lou Ruggirello. He’s starting his fifth season, has 99 wins, 60-some pins, yet he hasn’t been an All-American yet. That shows you how tough, how competitive things are now.”

All that said, Shifflet is very optimistic about the upcoming season.

“I’m more motivated than ever,” the coach continued. “I want to win.”

“It’s great to get the support we have for a competitive program, to get the best kids. There are so many high school wrestling programs on Long Island, but we’re the only D1 program.”

In a late September 2010 audio interview with Scott Casber for Takedown Radio, Tom Shifflet said, “I enjoy the pressure, if you call it that, of being at a program that’s in the spotlight.”

“Every day, I’m thankful to be here.”