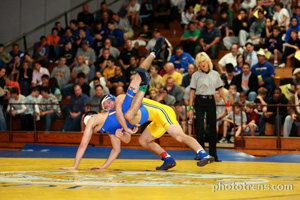 Pride fans descended upon the Physical Education Building on Thursday evening like ants queuing to a picnic.   For the large crowd in attendance (north of 500 attendees), they were treated to 13 action packed wrestling bouts.  The performance was every bit as exciting as anticipated.  There was the overtime win by Vince Varela over Luke Vaith, the dominating performance of Matt Loew, and the hardnosed battle between a pair of lightening quick competitors Justin Accordino and Zach Clemente.

Here’s a weight-by-weight summary of the evening’s performances, a video highlight sequence, and interviews with coach Shifflet, Vince Varela, and Matt Loew.

125 –  Franco met Detore first with the winner to challenge Bonanno for the top spot.  Franco’s neutral attack proved to be the difference in this bout.  Franco won by decision over DeTore, 5-1.

Bonanno scored a takedown early first period on Franco and maintained control for the 3-1 victory.

133 – This bout between Ruggirello and Manley ended like so many do.  After a couple of takedowns, Ruggirello locked up the double armbars and ended the bout in the first period.

141 – Varela had to work through 2 determined competitors.  After a scoreless first period, Varela’s steady attack and sure defense secured a 7-2 victory over Mike Doria.  In his  final bout against Luke Vaith, the first period again ended tied in a zero-zero knot.  Behind with 30 seconds remaining, Varela scored a reversal to take the bout into overtime.  Unlike his two first periods of the evening, Varela  pressed the offensive action, and scored the takedown for the win.

Opening the evening was Cody Ruggirello had and Jeff Rotella.  With a aggressive leg attack, Cody won by decision while demonstrating his brother’s prowess from top position. Cody won 7-2.

149 – This bout between Accordino and Clemente was an exhibition of speed and athleticism.  Clemente took the early lead, but Accordino remained composed, focused, and persistent to pull out the victory.

157  – Tyler Banks takes the first period lead with a hard defended takedown at the edge of the mat.  Nick Terdick ties the bout at 4 with a low single takedown with one minute left in the third period.   Banks escapes with 30 seconds remaining for the 5-4 victory.

165 – PJ Gillespie put on an exhibition of his signature offensive moves from neutral with a flurry of  snap downs, duck unders, and throw by’s.  PJ ended it in the third with a far side cradle after completing a takedown.

174 – Ryan Patrovich was all business as he moved in for the pin from the whistle.

189 – Ben Clymer faced Tim Murphy after his loss to Matt Loew.  Clymer pressed the action from the first whistle to the last winning 16-1.

197 – Typically the defensive wrestler from neutral, Matt Loew pressed the action with physical hand combat and a flurry of takedowns.  He won by decision over Tim Murphy.

When the evening was over, this fan was impressed with the offensive  and aggressive attacks from winners and losers alike.  The hard work the team put in on the off season was in full display.  No doubt this team will build steam as the season progresses to Philadelphia in March.  On behalf of all the staff at Lighthouse Wrestling, we wish the Pride  much success in 2010-11.