Leigh Jaynes beat the streets and climbed atop of the female wrestling world. 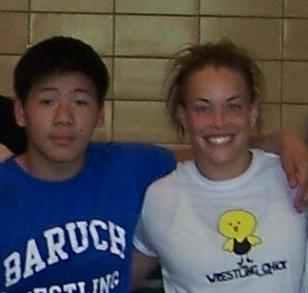 Just two days after a come from behind pin over Kelsey Campbell on the deck of the USS Intrepid at the Beat the Streets Gala, Leigh Jaynes, a 2007 National Champion and World Team member, instructed a free clinic at Baruch Middle School in lower Manhattan.  Jaynes drilled about 40 middle school and high school wrestlers in advanced freestyle technique.

Before the clinic came to a close, Jaynes spoke with the wrestlers, parents, and coaches and shared with them how she cherished her Beat the Streets Wrestling experience.  At age 13, Jaynes lived in a group home as her parents were forced to relinquish custody, and at 16, she was emancipated (declared independent and able to live on her own) after working to reach the highest level in the program.  After departing the group home, she lived with friends, slept in the streets, and even in the corner of a motel room while friends were partying until finally she moved in with her Aunt Adrienne.

In the midst of these turbulent years, Jaynes found wrestling and literally beat the streets. “Without wrestling I would be in jail maybe even dead.  My self-destructive behavior nearly ended it for me a few times,” said Jaynes.

Jaynes sought refuge in sports and after school activities.  “In High School I was always looking for a sport or activity to get into so I wouldn’t really have to go home.  I wanted to be a part of every band, even picked up the Tuba and Flute so I could play in brass bands.  I swam, played track, and yes cheerleading, before Coach Brian Bowker challenged me to wrestle.  Bowk had a knack for targeting kids with an edge to them.  When he told me I wouldn’t last two weeks in the wrestling room, I thought, ‘We’ll see about that.’”

Through wrestling, Jaynes developed mental toughness and a strong work ethic.  “Wrestling gave me the opportunity to go to college and get not one, but two degrees.  It provided me with the discipline to have a successful career in the US Army.  I am healthy, confident and happy because of this sport.”

The road to the top of the sport has not been without its bumps.  Female wrestlers face unique challenges.   Recently, Jaynes and another elite female wrestler were offered “sponsorships.” These sponsorships ended when they refused to engage in sexual relationships with the sponsors.  Jaynes warned girls at the BTS clinic to always know what a person’s intention is for helping and to question what they might want in return.

Other top female wrestlers faced sexual harassment, mental and even physical abuse from male coaches and teammates for simply wanting to be part of something good.  The resistance to women in wrestling is something that needs to go away.  Wrestling empowers women, it teaches them how strong they really are and to be independent.  As wrestling has done for so many men, it turns women into leaders.  Dan Gable said, “America needs wrestling.”  Jaynes is living proof that American girls also need wrestling.  While telling the wrestlers that they are the future of NCAA and Olympic wrestling, she impressed upon them to stand up against wrong and to do what’s right for women in wrestling.

Many participants in the Beat the Streets program face severe hardships in their everyday lives.  Some live in the projects, have no parents, and even struggle for enough money to wash their laundry.   When asked what advice she had for a young kid going through similar adversity, Jaynes said with the sincerity, confidence, and gratitude of only someone who has been there could have, “I wouldn’t change my past for anything.  Going through the hardships has made me stronger than I ever thought possible. Seek refuge in your wrestling.  That is your time to overcome the pain and adversity.  Just know that those situations aren’t permanent, and your life will get better if you just keep pushing forward.”

Leigh Jaynes beat the streets and climbed atop of the female wrestling world.  She reminded us that adversity doesn’t have to be destiny when passionate volunteers connect with courageous kids and dedicate to the mission of making a difference in young people’s lives.

One thought on “Wrestling Saved My Life”