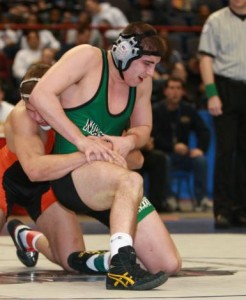 The new program was created by USA Wrestling and will be under the directorship of Brandon Slay, 2000 Olympic Champion and currently the Resident Coach for USA Wrestling.

The goal is to identify high school level wrestlers who have the passion for wrestling and the ability to train, learning the nuances of international wrestling while also participating in collegiate wrestling. Matt has signed a national level of intent and will join the Hofstra University squad in the fall of 2010.

The program will consist of national level wrestlers throughout the country who have shown excellence in Freestyle and Greco-Roman competition during their developmental years participating in national competition.

The entire national coaching staff including National Coach Zeke Jones, Bill Zadick and many of the national team members who live and train at the Olympic Training Center will be there to interact with the high school wrestlers.

Wantagh High School has been very supportive and has made provisions for Matt to graduate early in order to participate in the spring program.

Reports indicate that Matt is enjoying his stay and feels very comfortable with all the wrestlers from all over the country. Freestyle Season begins very soon as the NY-USAW people are organizing Freestyle Qualifying tournaments throughout the state.

The “Road to Fargo” 2010 Annual New York State Cadet , Jr. Freestyle and Greco-Roman Championships are scheduled for May 7-8-9.

For further information regarding qualifiers and NYS Information go to: www.ny-usawrestling.org