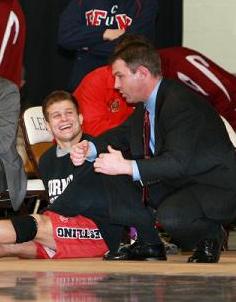 Six days until the NCAA’s and I am pleased to say the Big Red grapplers are ready to roll. Special thanks to all the Cornell red clad fans who showed up in Bethlehem to support the team. Although I look at this tournament as nothing more than an NCAA qualifier I have to admit I enjoy winning it if for no other reason so that Lehigh doesn’t.

Here is my recap.

125 As expected Troy Nickerson claimed his third EIWA title. He recorded the only fall in the finals when he pinned Garret Frey of Princeton. Garret is Adam Frey’s brother and is currently a freshman at Princeton. Troy also won the Fletcher Award, an award presented to the senior wrestler who earned the most tournament points during his career.

133 Mike Grey dominated a very tough field in winning his first EIWA title. Mike has never looked better and he will be a factor at the NCAA’s. At the beginning of the year he made a commitment to improving his top work. His hard work has paid off as he is not only ridding but turning and pinning the opposition.

141 Kyle Dake hadn’t wrestled in almost a month and it took him a day to shake off the rust. He started out very slowly on Saturday but showed why he is the number one ranked wrestler in the country on Sunday but easily defeating Jordan Lipp of American University. For the twenty of more of you that emailed me, yes Kyle twisted his ankle late in the match but he is fine and will not miss any practice.

149 Corey Manson wrestled his typical hard nose style but ran into a couple equally talented wrestlers. He lost two close matches to returning All-Americans and then was pinned in the 7th/8th place match while winning by two. Corey made great improvements on the year but he still finds too many ways to lose tight matches. Next year I expect for Corey to win those matches.

165 Justin Kerber continues to improve following a slow season start. He lost a close match to Hatchett of Lehigh in the semi-finals. I believe he outwrestled Hatchett despite the loss. I guess this is only fair since I felt he was outwrestled by Hatchett in their dual meet encounter; a match that Justin won. I expect for Justin to continue to improve through the NCAA’s and there is no reason he cannot find a way onto the podium.

174 Not to sound like a broken record but Lewnes was completely dominant. Mack biggest improvement from last year is in his aggressiveness. He continues to attack regardless of the score. Mack was also awarded the Coaches Award for the Most Outstanding Wrestler.

184 Steve Bosak placed fourth in what was arguably the tournaments toughest weight, at least in the first four seeds. Steve won four matches, two of which by fall. He lost his third place match in the waning seconds but still received and automatic bid to the NCAA’s. Steve is one of our wrestlers who is unknown on the national scene. I believe this will change in Omaha. He is a barnacle on top and is going give his opponents fits.

197 Cam won his second EIWA title in as many years. He is unfazed by pressure which is a good thing because we need for Cam to score big points at the “Big Show” if we are going to reach our team goal of winning an NCAA championship.

285 Josh Arnone made it back to the tournament after three years of pain and frustration. I could not be happier for Josh but his career is anything but done. I have said since the beginning of the year, that Josh has the ability to reach the podium at 285. He will have to be perfect but I have no doubt he will make us all proud.

That’s it for now. It was a great tournament, it has been a great year and it is about to get better! See you all in Omaha.

All the best and no spell check (or grammar),