Like a tsunami, the John Glenn wrestling program has been steadily and quietly closing in on Section XI dominance. From an undistinguished Section XI finish in 2003 followed by incremental and steady improvement, the John Glenn tsunami hit shore in 2009 leaving a path of destruction in its wake. There were hints of what was to come in 2008 when they placed fourth in Section XI behind perennial powerhouses Brentwood, Hauppauge, and Huntington. Still, many have pierced Section XI’s top 5 standing only to have fallen out contention the following season.

Like a tsunami, the John Glenn wrestling program has been steadily and quietly closing in on Section XI dominance.  From an undistinguished Section XI finish in 2003 followed by incremental and steady improvement,   the tsunami hit shore in 2009 leaving a path of destruction in its wake.  There were hints of what was to come in 2008 when they placed fourth in Section XI behind perennial powerhouses Brentwood, Hauppauge, and Huntington.  Still, many have pierced Section XI’s top 5 standing only to have fallen out contention the following season.

Then in December of 2008, they stormed through the Long Island Challenge crushing opponents Sayville 59 to 6; Garden City 57 to 9; a semifinal victory over 2008’s Section XI Champions, Brentwood 42 to 12; and a final victory over 2008’s Section VIII dual meet and tournament champions, MacArthur 31 to 30 while forfeiting 2 weights as emotions flared in the heat of competition.   Then at the Section XI championships in February, John Glenn punctuated the long and arduous winter season with a convincing victory over Hauppauge 192 to 165 to become Section XI team champions while crowning 2 individual champions, 3 runner ups, 1 third, 2 fourth, and 2 fifth place finishes.

To put the accomplishment into perspective, Section XI has been arguably New York’s toughest section.  In the past 30 years they have won the state title 14 times and have been a runner-up 6 times, and in the past 10 years, they have captured the title 6 times.   But if that doesn’t put the magnitude of their accomplishment into perspective, consider this:  John Glenn qualifies for small school status making them eligible to compete in Division 2. They last competed in D2 in 2007. With only 600 students in the high school, they fielded a team of 65 with an A and a B team competing on a varsity schedule.  When you consider the challenge, it’s apparent that their success was no accident.  It starts and ends with leadership and a community dedicated to excellence. 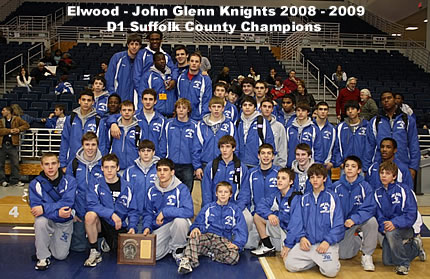 The powerhouse that has become John Glenn has been building since 1999 when Tom Giaramita began the youth program.  Giaramita, a former wrestler of Hall of Fame Huntington coach Lou Giani, embossed his Huntington wrestling roots in the youth club name:  Blue Wave, a cross between Huntington Blue Devils and New Wave, signifying what was to come.   Thirty years ago Giaramita was a proud teammate of Huntington’s 1977 section and state championship team.  “My goal was for my kids to have a similar experience to mine,” said Giaramita.  Giaramita and his dedicated team director Joe Fusaro and his coaches Mike Meehan, Tim Hawkrigg,  and George Sutherland were the seaquake that set the tsunami in motion. New additions to the youth staff  Bill Faxon, Greg Ancewicz, Jeff Porrello, and Joe Macchia, and veteran middle school coach Darren Szokoli continue to energize the tsunami.

In 2006, Junior Varisty Coach TJ Brocking was awarded the varsity head coaching job.   A gym teacher in the district, a former CW Post fullback, and a 189lbs Section XI runner-up out of Sayville in 1998 (losing to future Harvard All-American Dave Rechul), Brocking had the pedigree to lead John Glenn to the next level.  He had been around wrestling since a small child when his father would sit him at the corner of the mat to watch as he refereed.   His fondest wrestling memories are of the great Longwood and Sachem teams of the 80’s and early 90’s.  “These matches drew me into wrestling.  That is the caliber of team that I strive for, “ said Brocking.

Brocking’s right hand assistant is Bill Davey.  Davey comes from a family of wrestling as well:  his cousin, Rocky Davey, coaches at Riverhead.   Davey was head coach of Kings Park for 11 years and an assistant at Commack.  If you ever witnessed Davey coaching on the sidelines, you can see the old school values run through his veins.   He’s tough, determined, and disciplined, reminiscent of an army drill sergeant.  With Davey’s font of experience, he has served as a mentor to the younger Brocking. Together, they were the aftershocks invigorating and propelling the  tsunami.

With Brocking’s old school influences and Davey’s old school demeanor, the duo’s philosophy can be summed up in words made famous by Vice Presidential candidate Sarah Palin: “drill baby drill.”  Only it’s not the type of drilling she had in mind.  Practices are structured to move quickly, rigorously, and efficiently.  “It’s the same routine every day:  same amount of time, same warm-up, same calisthenics, same drills, position, scrimmage, live, conditioning, and lifting. We structure it this way so that the kids know what to expect. They form a routine, and it allows us to move through practices quickly while reinforcing, through constant repetition, the skills necessary to build champions,” said Brocking. The goal is steady, constant improvement.  “We want the kids to focus on improving a little bit every day.  Each day they walk out of practice, we want them to notice improvement,” said Brocking, “and as their coaches, so do we.”

As a team sport, the wrestling community often loses site of the importance of teamwork but not Brocking.  It’s the team’s responsibility to keep the winning tradition going.   The varsity wrestlers give back by helping coach the youth and middle school programs. “We talk about keeping the tradition alive, and how they can all contribute,” said Brocking.   Being a football player, he also recognizes how having the support of teammates and a shared mission to be the best can help athletes meet and exceed their potential.  “We’re like a family.  We go bowling together; we go to the movies; we had 30 teammates this summer for a week of camp.  We’re very close, and we’ll do anything for each other to be successful,” said Brocking. 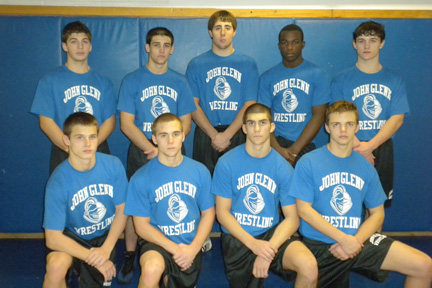 After an outstanding season like 2009, what could possibly be next?  There are many new challenges.  A repeat section title is one.  No doubt they have a big red target on their backs in highly competitive Section XI.  To repeat would prove they aren’t just a flash in the pan.  Getting more wrestlers upstate is another.  However, the dual meet title has special allure to Brocking.  “It’s an honor to be invited to the UE duals, and an even greater one to win,” said Brocking.  No doubt the challenge is huge.  With perennial powerhouses Chenango Forks and Spencerport to dethrone, they have their work cut out.  But when the John Glenn tsunami comes ashore in Union-Endicott on January 2nd and 3rd, they may just leave another path of destruction in their wake and claim the team title in convincing fashion as they did only a year ago at the Long Island Challenge.