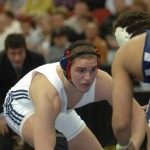 At first glance, it might have seemed like a foregone conclusion that Evan Knight, a senior at Urbandale High School in Iowa, would end up donning a cardinal and gold Iowa State singlet….After all, his father, Steve Knight, was an All-American for the Cyclones and spent three seasons on the Iowa State coaching staff. His uncle, Dan Knight, was also an All-American for the Cyclones. Three other Iowa high school seniors with Iowa State in their blood, Michael Moreno, Kyven Gadson, and Trevor Voelker, have already announced their intentions to be Cyclones.

But on Tuesday, Knight chose a different path than his father and uncle when he gave a verbal commitment to Rob Koll and the Cornell Big Red. Knight chose Cornell over Iowa State, Minnesota, Wisconsin, and Arizona State. He projects collegiately at 184 pounds.

Knight is a two-time Iowa Class 3A state champion and three-time state finalist. As a freshman, Knight finished runner-up at 152 pounds. He claimed the 160-pound state title as a sophomore. Last season, as a junior, Knight moved up two weight classes and won the state title at 189 pounds. He was a Cadet Nationals freestyle All-American in 2007.

“Cornell is unlike any other school,” said Knight, who plans to study developmental sociology. “They have a national championship caliber program, unbeatable academics, and the best coaching and workout partners in the country for my weight.”

Steve Knight and Rob Koll trained together at Team Foxcatcher in the early 90’s and developed a lasting friendship.

“From the time I was young my dad has been talking about Cornell and Koll’s ability as a great coach,” said Knight. “My dad believes he is one of the most technical guys in the sport, as a wrestler and as a coach.”

Knight says that his father, who has national and international success both as a wrestler and coach, was instrumental during the recruiting process.

“He was instrumental in the fact that he knows and communicates with numerous college coaches,” said Knight. “It’s was easy for coaches to contact me because they had a friendship with him and that was cool. That helped me a lot.”

Cornell is on the brink of landing one of the nation’s top recruiting classes. Knight, who is ranked as the No. 50 recruit in the country, becomes the fourth InterMat Top 100 recruit from the Class of 2010 to give a verbal commitment to Cornell, joining No. 3 Chris Villalonga (Blair Academy, NJ), No. 4 Marshall Peppelman (Central Dauphin, PA), and No. 99 Jesse Shanaman (Blair Academy, NJ).

“All of those guys happened to be on my visit,” said Knight. “They are all tough. It’s exciting to know how tough our team could be.”

Knight credits much of his wrestling success to Excel Wrestling, a nationally-renowned program operated by his father.

“Excel Wrestling has definitely developed me into the wrestler I am today,” said Knight. “My dad coaching the program has helped me greatly. He has worked with me every day since I was six. Excel has allowed me to work with some of the best technicians in the world through camps and traveling. I have had opportunities to wrestle all through Europe and this summer Japan.”

Knight’s goals for his final season of high school wrestling are to be an undefeated state champion, making the FILA Junior World Team, and win a Junior Nationals title in Fargo. As for college and beyond, Knight has high aspirations and believes that he will be in the perfect environment in accomplish his goals on and off the mat.

“There have been many national champions as true freshmen,” said Knight. “I think with a lot more preparation I will be ready to get the job done.”

“I am training to become the very best I can be and I’m looking at a freestyle career after college. I think the coaching staff at Cornell can get me to where I need to be to accomplish all of my goals in wrestling and academically.”