The summer has passed by all too quickly, and the entire team has returned to Ithaca. We had a productive summer, and I am ecstatic to have everyone back. Actually this comes as no surprise to me since we had plus or minus 20 wrestlers training in Ithaca for all or part of the entire summer.

The summer has passed by all too quickly, and the entire team has returned to Ithaca. We had a productive summer, and I am ecstatic to have everyone back. Actually this comes as no surprise to me since we had plus or minus 20 wrestlers training in Ithaca for all or part of the entire summer.

I have been asked by many of you how far will we drop without the leadership of Cornell stalwarts Jordan Leen, Steve Anceravage and Zach Hammond. Although it is always difficult to replace wrestlers of this caliber, I can say without hubris that this year’s team has the makings of another contender. There are many variables and obstacles to this success, but I am confident that by the season’s end we will have a very formidable crew.

In order to maximize our team’s potential, there will be some rearranging of the line-up. The following is my preseason weight-by-weight synopsis. 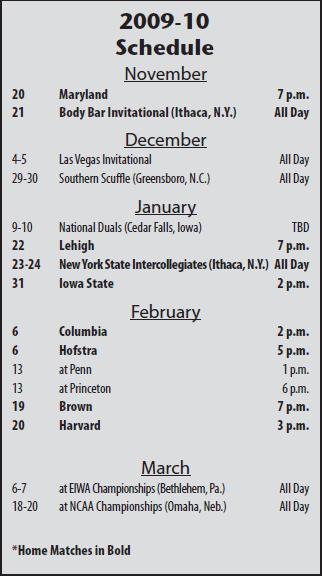 Obviously anything less than a national championship for Troy Nickerson would be a disappointment. Troy is back on the mats, but may miss some early action depending upon how soon he is released to compete. In his absence you can expect great results from Frank Perrelli. Frank is a tremendous competitor and is already an All-American caliber wrestler in his own right. Others to watch: Tyler Biscaha.

If I had to guarantee one wrestler who will be a positive surprise, Mike Grey would be that wrestler. That is saying a great deal for someone who has already placed at the NCAA tournament, but that is how impressed I am with Mike. He spent the summer training with “Spartanisk” zeal. Others to watch: Quinton Leith.

I hate to build up too much expectation for a freshman, but since I have been referring to Kyle as the “second coming of Troy” I guess it is too late! Kyle grew up in Lansing, N.Y. and has been to more Cornell wrestling matches than any of our current wrestlers. He is going to be a great one, and I am certain having him on the team will help us to continue to build our fan base within the local community. Others to watch: Peter Weiss and Philip Smith.

After watching Manson work out for about four hours and finding out he still weighed 158lbs, I made the decision that he would be better suited for 149lbs. He loves to train and is solid muscle. For those of you that have not seen Corey, imagine a picture of me only shorter and slightly less buff . Others to watch: Brian Alves, Matt Metzler and Scott Albrecht.

DJ Meagher struggled to make 149lbs last year, and I don’t expect 157lbs to be much easier. Ironically, I recruited DJ as a 133lbs wrestler. Also at this weight is John Basting. John started for us in a few matches last year, and I expect this will be a tight wrestle off. DJ is better on the mat, while John is very tough defensibly. Others to watch: Derek Schreiner.

Throughout his career, Justin Kerber has wrestled at 197lbs, 184lbs and 174lbs. Therefore logic dictates that I pull him down to 165lbs this year. Actually this was a tough decision, but I felt that Justin could be equally effective at 165lbs or 174lbs. I also believe Mack Lewnes will be much more effective at 174lbs than at 165lbs, so I asked Justin if he would be willing to make the cut. Justin accepted the challenge and in turn changed his summer training regimen. This means he cut back on the heavy lifting and increased his road work. The hard work has paid dividends and Justin walks around hydrated and happy between 176-178lbs. This might sound like a lot to a casual wrestling fan, but the season has not even started so I do not expect the cut to be too difficult. This is going to be a great year for Justin. He is mentally and physically tough, and for the first time in his career will be the same size if not larger than his opponents. The combination of these three variables spells trouble for the competition.

Mack Lewnes will have a great season. He walks around at a solid 190lbs and will be a large 174lbs wrestler. Like Troy, anything less than a national championship will be a disappointment for Mack and a surprise to me. Others to watch: Colin McDonald, Warner Phipps.

A great deal of our dual meet success will depend on how effective we are in replacing Justin Kerber. I am confident in saying we will be more than just competitive at this weight class. We have a bunch of tough kids in the room at this weight, but the three that I expect to rise to the top are Steve Bosak, Mike Moore and Nate Holley. Steve had a great first semester last year before being injured in the Las Vegas Open. Mike Moore had a similar fate, suffering a season ending injury in the Binghamton Open. Nate Holly has had some very good performances throughout his career, but needs to be more consistent if he is going to take over the starting role. Others to watch: Travis Dale.

Cam “the Simonator” Simaz is my second pick for “most improved”. The kid gets better every time he beats on me. I am not taking credit for teaching him anything because all I do when I work out with him is try to stay alive. He has gained a great deal of strength, and he will be just about every opponent’s worst nightmare. Others to watch: George Kocher, Carl Landers, Stryker Lane, Matt Panasevich and Jason Winckel.

Yes, Josh is going 285lbs and at 245lbs. I expect he will be as strong or stronger than just about everyone he wrestles. Josh has had a tough time with injuries, and I believe he will be more likely to stay healthy at this weight. He has also had a productive summer of weight training and wrestling. After four months without an injury, I have no reason to not believe he will be healthy for his senior campaign. Assuming this is the case there is no heavyweight that Josh cannot defeat. Others to watch: Taylor Moore, Oney Snyder and Lukasz Stala.

That is my take on this year’s team. As my wife and assistants coaches always tell me “Rob you are always right”, so there is no reason not to expect great results for this year!