Unfortunately we came up short on our goal of a national championship. However, I was extremely proud of the team’s performance in general. We demonstrated to the wrestling community that Cornell is a serious contender and not just a “flash in the pan”. As long as we continue to bring in quality young man and work hard and smart we have teams that will challenge for title. It may take some time, but we will eventually reach our goal of a national championship! 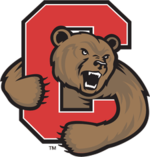 Hello all, we could not get back to Ithaca until Tuesday, thus the delay in my NCAA update.  I actually tried to send it out from my hotel room but my list-serve would not work from that location.  I am sure someone with a modicum of intelligence could figure out how to make it work but I am not that guy.

Each year our Cornell “C” of red continues to grow.  Special thanks to Chris and Ken Griffin for their help with producing the shirts as well as to Gene Nighman for distributing them. At one point “Gypsy Gene” looked like a New York City street vender as he turned the Hyatt lobby into the Cornell shirt distribution center.  I don’t believe the hotel could complain too much consider we booked over one hundred rooms per night at their residence. Unfortunately our current wrestlers choose to stay elsewhere because the Hyatt would not accommodate their request for one room with twenty additional cots.

Unfortunately we came up short on our goal of a national championship.  However, I was extremely proud of the team’s performance in general. We demonstrated to the wrestling community that Cornell is a serious contender and not just a “flash in the pan”.   As long as we continue to bring in quality young man and work hard and smart we have teams that will challenge for title.  It may take some time, but we will eventually reach our goal of a national championship!

125 Troy Nickerson National Champion!!! We are so proud of Troy after overcoming multiple physical setbacks to become Cornell’s ninth national champion. Troy did an outstanding job of hiding the severity of his injury.  His training was significantly affected over the past three months. We had to reduce his mat time and increase the amount of time he spent on the treadmill and exercise bike.  On top of his injury, Troy’s father, Bob, has also been fighting a very tough battle with cancer.  Bob and Troy are very close so I know this has been weighing heavily upon Troy.  Troy dedicated this national championship to his father, while the next one will be for himself.

133 Mike Grey went 2-2 in one of the tournaments deepest and toughest weight classes. Mike came out of this tournament determined to get back on the podium. He is tenacious competitor and one of the hardest workers on the team.  Our plan for Mike is compete much more over the summer. He needs to keep “his tools sharpened” and I plan on being the grinding stone!

149 DJ Meagher lost two close matches and won one by default. Without DJ’s points we would have slipped into sixth place. I am so thankful to DJ for postponing his internship and committing himself to the team. Without DJ it is unlikely that we would have placed second at the National Duals and fifth at the NCAA’s

157 Jordan capped off a brilliant career by placing third. Jordan won five matches including wins over two All-Americans and one national champion.  Not the way I had hoped that Jordan would end his career, but Jordan will always go down as one of my all-time favorites.  He was a pleasure to coach and a truly outstanding representative for our team as well as for the university.

165 Mack Lewnes did not have a good weekend going 0-2. For the first time in Mack’s career I saw him get completely fatigued.  Mack had been sick, and I believe the combination of stress, illness and outstanding competition did him in.  No one feels worse about Mack’s showing than Mack, and I can assure all that he will be back with a vengeance.

174 Steve Anceravage placed fifth with two falls. Steve, like Jordan, will be difficult to replace.  He was a true joy to coach and an inspirational team leader.  He is extremely proud of his Cornell education and will be loyal fan upon graduation.

184 Justin Kerber had a disappointing tournament going 0-2. I am not sure if Justin was a little overwhelmed by his first time NCAA experience or he was simply outwrestled. Regardless, Justin had a fantastic season and will undoubtedly be back to the tournament next year. I am confident this experience will help him perform better next year.

197 Cameron Simaz fought his way to an eight place All-American finish. Cam becomes the seventh freshman All-American in the past eight years! I have been bragging on Cam this entire year so thank goodness he came through.  I was so high on Cam I actually started believing he could win it, but he was simply too small to compete with the top guys. Next year he will either be a full sized 197 pound wrestler or will be bring him down to 184.

285 Zach Hammond finished his career going 1-2. I am so pleased that Zach had an opportunity to wrestle at the NCAA’s one last time.
Unfortunately Zach never really got back to his peak form. I believe his confidence was a bigger issue than his body. By the time he had regained his health, his confidence had been destroyed. He stopped hitting his offensive attacks that had made him so dangerous in the past.

What’s up next for the Big Red?  Next year we lose the services of three seniors, Jordan, Steve and Zach.  It will be incredibly tough to replace these guys.  My plan is to move DJ up to 157.  He will compete with John Basting for the starting spot.  Justin Kerber plans to move down to his natural weight of 174 and Maciej Jochym returns at 285, after taking this year out of school.

This plan opens up spots at 149 and 184. 149 will be filled by either Brian Alves, Eric McGill or any number of outstanding incoming recruits. 184 will depend on whether Josh Arnone returns at 197 or 285. Yes, Josh will return. I was told that I am not permitted to give out any medical information unless that person is being quoted. For this reason I will have Josh add a section to my next update to let you all know the good news. I believe this team will be extremely strong and has the ability to compete for another top five NCAA finish.

Tidbits:
* Since 2002, a Cornell wrestler has been named Ivy Wrestler of the Year 7 out 8 times.
* Cornell has placed in the top 5, three out of the past five years.
* This is the seventh year in a row that Cornell has placed in the top 12 (10,11,4,5,12,9,5).
* Cornell has produced four All-Americans for five consecutive years.
* Cornell has produced 28 All-Americans since 2002 *There were anywhere from 400-500 Cornell fans at Saturday’s celebration party and no less than 300 at the previous nights affair. Not only was this a great turnout but it was wonderful to see so many young alumni.
* The prettiest girl featured on the Jumbotron (giant television screen at the Scott Trade Center, not a nickname for Damion Hahn) was wearing a Cornell Wrestling t-shirt. FYI, it was freshman Quin Leith’s girlfriend.

Troy Nickerson Named EIWA Wrestler of the Year
Cornell junior Troy Nickerson has been named EIWA Wrestler of the Year following a weekend in which he won an NCAA Championship at 125 pounds at the NCAA Championships held at the Scottrade Center in St Louis, MO. He won five straight bouts in St Louis, capped by a 2-1 tiebreaker win over former champion Paul Donahoe of Edinboro.

Nickerson, who two weeks earlier had won an EIWA title, thus became a tree-time All-American. He was runnerup as a freshman in 2006, and placed third in 2007 before sitting out the 2008 season with an injury. Nickerson completes his season with a perfect 25-0 record.

Simaz, who competes at 197 pounds, won an EIWA championship two weeks ago. He came into the NCAA tournament unseeded, and defeated the #11 seed, Andrew Anderson of Northern Iowa 5-3 in his first bout. He won three consecutive consolation bouts before losing inj overtime to Hudson Taylor of Maryland, the eventual third place winner. He lost 14-4 to Brandon Halsey of Bakersfield to place eighth.

Simaz ends his first season with a record of 37-11.

All the best, Rob