﻿If you are a Long Island wrestling fan, then you’ve no doubt heard of Paul Liguori, and if it seems like he has been around forever, it’s because he has.

I recall Paul wrestling as a youth and being in awe of how accomplished he was against other wrestlers of his own age. It seems like every time, there has been a wrestling event, Paul has been part of it. Wrestling has opened a lot of doors allowing him to make friends and bonds that will last a lifetime, traveling, competing, and enjoying the success. 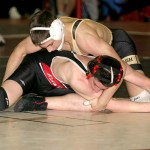 ﻿If you are a Long Island wrestling fan, then you’ve no doubt heard of Paul Liguori, and if it seems like he has been around forever, it’s because he has.

I recall Paul wrestling as a youth and being in awe of how accomplished he was against other wrestlers of his own age. It seems like every time, there has been a wrestling event, Paul has been part of it. Wrestling has opened a lot of doors allowing him to make friends and bonds that will last a lifetime, traveling, competing, and enjoying the success.

Over his career Paul has built a long and distinguished list of accomplishments. To name a few of his most notable accomplishments, Paul is a two time State Champion winning his first title at 96 pounds in 2006. He followed this up with a second title at 112 pounds in 2007 and went on to a second place All American finish in the Sophomore Nationals losing in the finals in overtime to Kyle Dake. In 2008, Paul dropped one match and finished third in NYS at 125lbs, and while in Fargo last summer, Paul earned All American honors in Greco. Currently Paul is ranked number two in New York State at 135 pounds and has signed with Harvard.

Paul sat down with Lighthouse Wrestling Editor, Irwin Loew, to discuss his heralded career that began in kindergarten many years ago as he is our choice for Wrestler of the week.

LHW: What made you start out wrestling? Why do you wrestle? Did you feel any pressure knowing your Grandfather was a successfully grappler back in the day for Mepham High School?

Paul: I started wrestling when I was about 5 years old because my dad helped run the Wantagh Youth Wrestling Club. I won my first tournament in first grade and I loved the feeling of winning which led me to wrestle more often. Next thing I knew I was traveling every weekend going to tournaments all along the East Coast. I’m proud that my Grandfather was a Long Island champion, but I definitely wouldn’t say that I ever felt any pressure from it.

LHW: Would you say, you have more natural ability, or do you have to work hard at it? What makes you so good?

Paul: When I was younger I won a lot because of my athletic ability and competitiveness, but as you get older being successful is all about how much time you put into it. I practice all year round, lift weights in the off season and basically just try to do something everyday that I feel will help make me better.

LHW: What is the hardest part of wrestling? What would you like to improve on?

Paul: The hardest part in wrestling is staying motivated. Every season has ups and downs but the people who grind through the rough patches and peak at the right time are always on the top of the podium. There is nothing specific that I want to improve on, but mainly to just get better and be ready for the end of the season.

LHW: What colleges were you really interested in beside Harvard? How did you come to the decision to attend Harvard?  What are you plans for a major?

Paul: I was mainly interested in Harvard, University of Pennsylvania, Columbia, Duke, and University of Virginia. My decision to go to Harvard came from a combination of academics and the wrestling program. Harvard has a combination of great wrestling partners along with great coaches, which are all I can really ask for. I haven’t decided yet but as of right now I’m deciding between majoring in business or Law.

LHW: What is going to be the hardest transition in College?

Paul: The hardest transition for me in college will definitely be the workload. A lot of times in high school I was able to do very well with my schoolwork while putting in minimal time. At Harvard I’m going to have to put a lot more effort into my schoolwork.

Paul: I had a lot of fun on my official visit to Harvard, and I liked everyone on the team. This was definitely a deciding factor in my decision to go to Harvard, plus it’s an added bonus that there are so many NY and Long Island wrestlers who I’ve already known for a long time. Next year I see myself at either 133 or 141 lbs.

LHW: What is your best memory from your High School wrestling career? What is the biggest disappointment?

LHW: What can you tell us about your coaches and teammates and how they have influenced you?

Paul: I’ve had so many different coaches who’ve influenced me so much throughout the course of my career. From my pee-wee coaches up to my coaches at Wantagh, they all influenced and motivated me to be the best wrestler that I could.  I couldn’t ask for a better combination of coaches than what I have at Wantagh with Coach Murphy, Gillespie, and Medina. I also couldn’t have achieved what I did without having Greisheimer, Bonnano, John Friscia, and Quimes Delacruz as workout partners.

Paul: Through wrestling I learned a lot about what it means to be dedicated how hard  work pays off. Wrestling taught me how to set goals, learn from my mistakes, and be the best that I could be. If nothing else, I also met the some of the most inspirational people and made great friends through wrestling.

Paul: If I could give advice to young wrestlers it is that hard work pays off. If you look at someone like Steve Bonnano, he only started wrestling in middle school but he worked his butt off and took his lumps early in his career. Eventually he won a state title and he’s wrestling D1 at Hoftstra. If you put the time in, eventually you will be successful.

LHW: Last season in the New York State championship, your quest for another State championship was cut short by Joe Grippi of Fox Lane in the first round.  You had a tremendous performance in the wrestle backs where you placed third (some would argue it is difficult than placing first as there are more bouts) and higher than Joe Grippi, who finally placed sixth.  Can you share with us your experience in that match and the state tournament last season?  In adversity there is often opportunity. What did you learn from that experience?  How has it influenced how you approach the sport?

Paul: Well I definitely have to agree that its much harder to wrestle back to third place than it is to take first. It’s a completely different attitude. In the winner’s bracket it’s much easier to take it one match at a time and wrestle hard every match for six minutes. In the loser’s bracket, it’s really easy to look ahead and get depressed when you realize that you have four or five more matches, and the best you can do is still less than what you had hoped for. Overall, while I obviously wish things had gone differently the experience itself was something I learned from.

LHW: That’s it for the serious stuff. We’d like to ask you a bunch of fun questions, and we hope you find them to be fun as well. What’s your favorite song/Band?

Paul: I don’t have a favorite band and my favorite song changes about every ten minutes. Right now before practice it’s Till I Collapse by Eminem.

Paul: I would want Russel Crow to play to play me, and my leading lady would have to be either Jessica Alba, Jennifer Anistan, or Sophia 0Bush.

Paul: My cooking is better than mom’s cooking. With that being said, I prefer restaurant food.

Paul: Over the summer I go to the beach a lot, and play all different sports with my friends. My favorite thing to do besides wrestling is playing dodge ball. If there was such a thing, my goal in life would be to become a professional dodge ball player.

Paul: My grandfather was a Long Island champion for Mepham back in the 1930’s. I have a 21 year old brother Pete who played center on the high school football team and attends school at Hofstra. Even though I have an Italian last name, I’m actually half Russian from my mom’s side of the family.

Thank you Paul for taking the time to answer these questions with LHW….We’re all excited for your success so far this season, and we are all rooting for your continued growth and success. We wish you all the best.