For those of you who made it to Hauppauge tonight or tuned into Lighthouse Wrestling’s live coverage of the battle for the League 5 championship, you had the privilege of watching perhaps the most exciting dual meet of 2009, in a season where there has been no shortage of great matches. 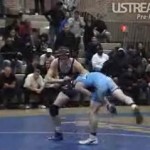 For those of you who made it to Hauppauge Friday evening or tuned into Lighthouse Wrestling’s live coverage of the battle for the League 5 championship, you had the privilege of watching perhaps the most exciting dual meet of 2009, in a season where there has been no shortage of great matches.

It started like most expected it would end, with Hauppauge defeating Huntington, their League 5 rival.  Kicking off the match at 140lbs, Hauppauge quickly built a 10-0 lead behind wins by Jesse Marro, Kevin Panebianco, and Anthony Boneventura.

Already in a mini hole, if Huntington had any hopes of mounting a comeback, they needed to put an end to the Hauppauge winning streak NOW and answer back with authority…And, respond they did, winning the next three bouts to even the dual at 10 apiece.  Leading the charge were Louis Puca, Ryan Fox, and Anthony Lupi.  Such set the tone of this dual as every time Hauppauge would surge ahead, Huntington would bounce back with a winning effort to square the dual.

Behind 14-10 heading into the 103lbs bout, it fell on Damon McQueen’s shoulders to keep the Blue Devils’ chance at victory alive. He did that and more, earning an 11-1 major decision to again pull the two rivals into a dead tie.

Unbeknownst to the fans, the match was playing out precisely how Blue Devils’ coach, Kieran Mock had envisioned:  Mock explained his strategy saying,   “Our strategy was to keep it close.  They (Hauppauge) had the better team.  If we could keep it close and win the close matches, we thought we could win the dual meet.”

One of those close matches that Mock was talking about occurred at 119 where Kenneth Collado, a defending NYS Champion (1st @103 in 2008), was pitted against Nigel McNeil, forth in Section XI last year at 103.  In a bout where Collado controlled the action for the first two periods and looked to be in good shape to pad the Hauppauge lead to 23-14, it was McNiel who saved the best for last, scoring a takedown with approximately 20 seconds remaining to win the bout and to cut the deficit in half.  Reflecting on the match, Coach Mock said, “119 was the best match that I’ve ever seen.   These two kids showed why they are champions.”

Despite Collado’s demoralizing loss, Hauppauge was immediately able to pick itself off of the canvas, taking the next bout to again build a formidable lead, 26 to 17 with only a pair of matches left undecided.

The gauntlet had been thrown down.  If the visiting school wanted to lay their claim for league supremacy, they would need both of their final two wrestlers to emerge victorious.  One of them was going to need a pin to claim the title…Enter Omar Santiago.  Deciding that it was his responsibility to get the fall for his teammates, Santiago was relentless in his attack from the second the whistle blew.  His aggressiveness paid dividends as he was able to secure the pin at 3:53 to keep the Blue Devils’ hopes alive.  All now rested on the shoulders of a Huntington senior, Marco Lagone.

Lagone, recovering from a knee injury that occurred earlier in the season, is no stranger to adversity and battle.  Since hurting his knee, it has been a daily routine to go to war with himself in an attempt to get back into proper wrestling shape.   Hence, when he found himself trailing in the closing seconds of his bout, he was hardly fazed.  Instead, Lagone maintained his poise and did what he needed to do  in order to tie the match with short time on the clock….It was only fitting in a dual meet where the score was tied twice that the deciding match would be decided in overtime.

Asked what his strategy was heading into the match, Marco responded, “I was determined to win. I couldn’t let the team down.”  Lagone did not!!!  Countering a Piscatello shot with a crotch hold, Marco was able to scramble into a Navy to score a takedown…Today was his day to be a hero.

“I told him it was going to come down to him,” said Coach Mock, “I didn’t know what we would need when it came to Marco, but all he had to do was win by decision.”

Despite the fact that the dual ended with the score deadlocked at 26-26, Huntington was credited with the win on criteria, holding the 7-6 edge in total bouts won.  The title was coming home to Huntington.

Even in defeat, Hauppauge Coach, Chris Messina, exuded nothing but pure class, summarizing the dual by saying, “They (Huntington) did everything possible to win.  It came down to the last match.  They did a great job.”