It’s a large responsibility for an eighth grade varsity wrestler, but Nick Hall is no ordinary wrestler — even for a prodigy. In the last match of a hotly contested dual meet against Brentwood, Section XI’s perennial powerhouse, where Longwood held the lead only once, it was up to Nick Hall to deliver a victory for his team. 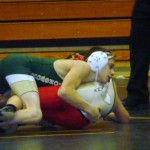 It’s a large responsibility for an eighth grade varsity wrestler, but Nick Hall is no ordinary wrestler — even for a prodigy. In the last match of a hotly contested dual meet against Brentwood, Section XI’s perennial powerhouse, where Longwood held the lead only once, it was up to Nick Hall to deliver a victory for his team.

At that moment, Brentwood’s victory looked as certain as could be under these circumstances, not because Nick was expected to lose, but who would have expected Nick to pin in a bout that looked to be difficult to win by decision?

With the score favoring Brentwood, 26-21, Nick stepped onto the mat with an uncommon, quiet confidence and determination against his opponent, Humberto Garcia. When they last met in the 2008 League I finals at 103lbs, Nick won by the score of 7-0.

With the fans, the teammates, and the coaches from both sides at the edge of their seats, Nick proceeded to push the action under the deafening roar of the crowd. Seemingly energized by the weight of the circumstances, Nick methodically worked his formidable opponent into submission, scoring a pin in 3:37 and bringing the victory home to a jubilant Longwood community.

The name Nick Hall hearkens back to an earlier dynasty at Longwood under the generalship of coach Picozzi when Longwood reigned second to none in NYS. Nick Hall Sr. was a standout wrestler on the 1990 and 1991 Longwood teams when he won Section XI twice and brought home a NYS championship at 215lbs in 1991.

As is often the case, wrestling is a passion passed on from father to son. Under the tutelage of his father, Nick Jr. has been refining his craft at an early age where he has dominated the local, state, and national competition. As an eighth grader, he already has an impressive career varsity record of 70 wins and 7 losses.

Not only has Nick Jr. benefited from his father’s expert guidance, Nick’s young and equally impressive teammates – Corey and Malik Rasheed, Casey Brice, Jonathon Timpone, and  Jennings, to name a few – have benefited as well, and are demonstrating the promise of another Longwood dynasty where the name Nick Hall once again has top billing.

Lighthouse Wrestling names Longwood’s Nick Hall Wrestler of the Week in recognition of his impressive performance in the Longwood victory over Brentwood. We asked Nick if would underscore this recognition by answering some questions.

LHW: We were at the Brentwood vs. Longwood match, covering it live, where we watched you score that impressive pin to win the match for Longwood. It was a very exciting dual meet against a strong opponent in Brentwood. Garcia is a tough wrestler. Last season you defeated him 7-0 in the league finals, so he is not someone you want to oppose to win by pin in such a match. Did you go out into the match looking for the pin? What was your strategy in that match? What were the instructions your coaches gave you? How did it feel to win the match for your team?

Nick: I knew Garcia was going to be a tough match but I didn’t really go into the match with much of a strategy besides going as hard as I could from the second the whistle blew. My coaches always tell me before all of my big matches “Do what you do” but only I know what that means, that’s my secret.

LHW: As an seventh and now eighth grader wrestling varsity, do you find the difference in age between your teammates and yourself difficult or uncomfortable? Were you apprehensive about it at all? Is it challenging to keep up with your schoolwork? How did your parents feel about it? What advice, if any, would you give to kid who has a chance to wrestle varsity and is considering it? Tell us a little about what it’s like wrestling varsity as a middle school athlete.

Nick: I never found the age difference between me and my teammates difficult or uncomfortable. We’ve been on the same team and wrestled together for about four years now so we all have a pretty close bond in and out of the wrestling room. I wasn’t apprehensive about it at all. I wanted to see how well I could do as a seventh grader up against these high school kids.

Its not a big challenge keeping up with my school work I think I do a pretty good job maintaining a pretty high average year round.

I don’t really know how my parents felt about it. My dad wanted me to do it more so than my mom. She thought I was still too young but I think they are proud of me and what I have accomplished so far.

The best advice I could give to a kid that wants to wrestle up on the varsity level is the advice my dad gave me before last season he said “what do you have to lose? these kids are older and already have experience on the high school level, but have faith and never sell yourself short” wrestling varsity in middle school is an honor.

I feel like a “big kid” when I stand next to my teammates at tournaments and when they introduce us at the beginning of duel meets. I also like not having to be separated from my teammates that I have wrestled with for the last four years just because of a little age difference.

LHW: Your dad was an accomplished wrestler for Coach Picozzi many years ago. What is it like wrestling for the same team and coach your dad wrestled for? Do you feel any pressure to succeed because of your dad’s accomplishments? What kind of influence has your father been on your wrestling?

Nick: I think its awesome wrestling for the same coach as my dad. Coach Picozzi teaches us a lot of the same moves and his tricks to make them work a little bit better as he did my dads team when he wrestled. I don’t feel any pressure to succeed because of my dads accomplishments because we both think that if I keep doing what I’m doing I can accomplish more than he did. My father has been the best influence I could ever ask for. He is always there when I need a pick-me-up after a tuff practice making weight. He’ll tell me a story about when he was in a similar situation and how he was feeling the same way, but that’s the price you have to pay to win.

LHW: Why do you wrestle?

Nick: I wrestle because I love the sport and especially the feeling of winning. Not with a team or a partner, but when you go out on the mat by yourself and put out all you have and succeed, that’s the best feeling to me.

LHW: That’s it for the serious stuff.  We’d like to ask you a bunch of fun questions, and we hope you find them to be fun as well. What’s your favorite song/Band?

Nick: my favorite song that I listen to before my matches is “stranglehold” by Ted Nugent but my favorite band is Metallica.

Nick: Its a close one. Its between Super Bad and Step Brothers.

Nick:. If I wasn’t playing my own roll, I would defiantly want my little brother Jake playing the younger me. Even though he has a twin, Rocco, we look identical. As for the lady part, who else but the beautiful Angelina Jo-Lee.

Nick: when I’m not cutting weight ill eat just about anything. But my favorite is the sandwich I get from the deli before I go to weigh in, grilled chicken, American cheese, bacon, and BBQ sauce. All season I always want to be able to sit down at a restaurant and order a big meal and eat it all, so I would have to go with restaurants.

Nick: my favorite hobbies when I’m not wrestling are bike riding with my friends and my cousin Jamey. I also enjoy cooking with my family.

Nick: 1) I can live off of frosted flakes and peanut butter and jelly sandwiches. 2) I hate school but I love social studies class. 3) besides the wrestling team, I only have about 5 friends

Nick: if I have any fans and there actually reading this still, wow you’re a great fan!

Thank you Nick for taking the time to answer these questions with LHW….We’re all excited for your success so far this season, and we are all rooting for your continued growth and success. We wish you all the best.