The 160lbs final wasn’t supposed to end this way, but Rocky Point’s Billy Coggins had other plans. Entering into the tournament as the eighth seed in the 160lbs weight class, Billy Coggins won each round – as it can only happen – one match at time. Never looking beyond his current opponent, Billy knocked off three opponents seeded ahead of him to win the Eastern States Classic 2009. 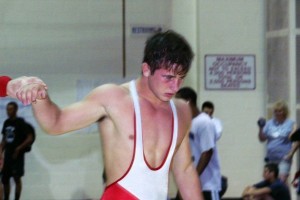 The 160lbs final wasn’t supposed to end this way, but Rocky Point’s Billy Coggins had other plans.  Entering into the tournament as the eighth seed in the 160lbs weight class, Billy Coggins won each round – as it can only happen – one match at time.  Never looking beyond his current opponent, Billy knocked off three opponents seeded ahead of him to win the Eastern States Classic 2009.

It was an uphill battle for Billy as he endured an overtime victory over Derek Golner of Tyngsborough in the round of 16, winning 5-3.  With that win, Billy had the opportunity to face the number one seed: James Brundage of Ossining, third in NYS D1 at 160lbs in 2008.

Many wrestlers would have doubts about their chances of defeating such an accomplished opponent, but not Billy, he came to the Eastern States Classic 2009 expecting to win, so he did, defeating James Brundage by a slim margin and winning the quarterfinal bout 3-2.

Invigorated by knocking off the top seeded opponent, Billy went on to easily defeat his semifinal opponent: Chris Marvin of Wayne, the fourth seeded opponent by a score of 9-3.

Then, what likely will be a prelude to the Suffolk County finals, Billy Coggins faced off against T.J. Neidhart of Shoreham-Wadding River.  T.J.  Neidhart is a returning All State DI wrestler placing third at the 145lbs weight class in 2008.

T.J. was all that stood in Billy’s path to an Eastern States championship, and T.J. wasn’t about to cooperate.   In a hard fought battle for first, Billy prevailed over his cross-town rival defeating T.J. by a slim 3-2 margin and earning the 160lbs Gold Medal at the 2009 Eastern States Classic.

Lighthouse Wrestling names Rocky Point’s Billy Coggins Wrestler of the Week in recognition of his impressive performance at the Eastern States Classic.  We asked Billy if would underscore this recognition by answering some questions.

LHW: First, congratulations on your outstanding performance at the Eastern States Classic and coming home with the 160lbs Championship.  What were your expectations going into the tournament?

Billy:.I expect to win every tournament, you have to set your expectations high in order to achieve your goals.

LHW: As the 8th seed to win the Eastern States you needed to defeat wrestlers who were expected to win over you.  You first met James Brundage – the first seed –  in the Quarterfinals, then Chris Marvin – the 4th seed – in the semifinals, and finally T.J. Neidhart – the 3rd seed – in the finals. It’s an impressive string of opponents to defeat in one tournament.  How do you prepare yourself mentally for these opponents?  What was your strategy for each opponent?

Billy:.I prepare myself for every opponent the same. You can’t take anyone lightly or give anyone too much respect.

LHW: Do you have plans to wrestle in college?  Can you share some of your plans for college?  What are you thinking of studying in college?

Billy:.I would like to attend a D1 school to wrestle. A couple of schools have contacted me but I haven’t had the time to think about it at this point in my season.

LHW: What got you started in wrestling?  Why do you wrestle?

Billy:.My first grade teacher gave me a kid wrestling flyer and I brought it home. My dad thought it was a good idea and encouraged me to start the sport and I fell in love with it. Wrestling really builds character and has provided me with a work ethic I will keep for the rest of my life.

LHW: That’s it for the serious stuff.  We’d like to ask you a bunch of fun questions, and we hope you find them to be fun as well. What’s your favorite song/Band?

Billy: Ashton Kutcher because he’s a pimp, and I would want Jessica Biel as my leading lady.

Billy: Personally I like going out to restaurants, nothing against mom’s cooking but nothing compares to outback’s cheesy fries.

Billy: I like hanging out with friends, going fishing in the summer, and spending quality time with my family.

Billy: I am balding at the age of sixteen, my sister and I have a close relationship, and I miss her now that she’s in college, and I had a mullet in third grade.

Billy: It’s just good to know that I have fans.

Thank you Billy for taking the time to answer these questions with LHW….We’re all excited for your success so far this season, and we are all rooting for your continued growth and success.  We wish you all the best.