In a popular 2007 movie [The Bucket List] the character Carter Chambers said you measure yourself by the people who measure themselves by you. If this is true, then Brentwood Head Wrestling Coach, Ralph Napolitano is a giant, both on and off of the mat. 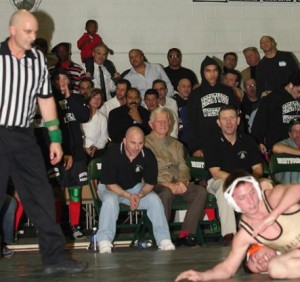 In a popular 2007 movie [The Bucket List] the character, Carter Chambers, said, “you measure yourself by the people who measure themselves by you.”   If this is true, then Brentwood Head Wrestling Coach, Ralph Napolitano is a giant, both on and off of the mat.

So immense was the prestige of the Brentwood wrestling program that between 1969 and 1976, the Indians, led by the aforementioned Campo, won the Suffolk County team title seven times, finishing as the runners-up in 1975.

Last season, Napolitano added a chapter of his own to the history book, as he led his alma mater to the county championship behind the efforts of talented young men such as Ricardo Gomes (3rd NYS, 2008), Warren Murray, Joshua Marsh (1st Section 11, 2008), Josue Mendez (6th NYS, 2008), Jonathan Murray (6th Section 11, 2008), Wilson Cardoza, Michael Hernandez (6th NYS, 2008), David Manzueta (3rd Section 11, 2008), and Alex Gomez (4th Section 11, 2008).  Hence, it would go without saying that as a coach, there are not many better.  However, to leave it at simply that would be to severely distort the image of who Ralph Napolitano truly is.  He is not a wrestling coach.  He is a gentleman who just happens to coach wrestling.  The impact that he has on the lives he shapes everyday goes far behind anything that can be taught in the wrestling room.

Like any red blooded American, Coach Napolitano wants to win as badly as the next guy.  However, in speaking with him, one cannot help but take notice that to him, success is measured by far more than just how many county and state champions he coaches.  To him, it means significantly more when he sees one of his wrestlers develop from the young person they were when entering the program into a well rounded adult ready to face as they leave behind Brentwood wrestling.  It is for this reason that Napolitano makes it a mission every year to take a personal stake in the lives of all that he coaches.

If there was ever a question of how remarkable a person Ralph Napolitano is, you need go no further than to look at the man’s actions outside of the realm of wrestling.  This past Christmas Eve, 13 of his wrestlers were invited into his home to rejoice in the holiday.  If this is not evidence enough of the warm relationships he shares with members of his team, keep in mind that this is a man who reserves a room in his home for one of his wrestlers who comes from a sometimes turbulent background.

Ralph Napolitano is great for the sport of wrestling.  But, he is 100 times better for all mankind.  We at LHW were fortunate that the coach was able to spare a few moments of his time to sit down and speak with us.

2 thoughts on “An Interview With Ralph Napolitano – Part I: The Man”