The wrestler of the week needs no introduction but we must give him some well due accolades. John Greisheimer has been wrestling since 4th grade and he appears ready for greatness… 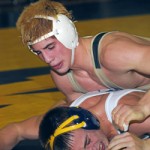 The wrestler of the week needs no introduction but we must give him some well due accolades. John Greisheimer has been wrestling since 4th grade and he appears ready for greatness. John is the defending State Champion from Section 8. Last year John went 49-1 suffering his only loss to Zach Clemente of La Salle Academy from Section 2.  After capturing his 1st NYS Championship, the Hammer followed this up with a 2nd place finish at the High School Nationals in Virginia last March. John has a career record of 145-14 with 92 pins and is climbing the ladder quickly.

On Saturday, December 6, 2008, while wrestling at the Johnson City Duals with his Wantagh High School team, Greisheimer avenged his only loss in two years with a stunning and quick pin against his good friend and teammate from the Junior Duals team – Zach Clemente. John finished the day with three pins and a decision.

The Lighthouse has named John its High School wrestler of the week in Nassau County for his accomplishments. We asked John if he would underscore this recognition by answering some questions.

LHW: That was an outstanding performance this weekend against Zach Clemente; last year when you met he beat you in a close match, and this year you defeat him by a pin.  How did you prepare for that match?  What goes through your head when in the middle of a tough match like that and your behind?  What was the difference this time?

John: I prepared by working in the room under the guidance of my coaches, Jimmy Murphy, Paul Gillespie, Izzy Medina and John Hamilton. I also wrestled with my teammates.

I always want to put constant pressure on my opponent, no matter what the score is. It does not matter if I am winning or losing.

The difference this time was my focus and better technique. My coaches told me not to let up and keep the pressure on.

LHW: What are your goals for this season?

LHW: Obviously a number of top D1 schools were courting you this season.  How did you come to select Edinboro?  What is it about their program that was deciding factor in your choice?

John: I selected Edinboro College because I attended the summer camp two years in a row and formed a connection with the Assistant coach, Cliff Moore who is a former Div 1 NCAA National Champion from Iowa. Coach Moore helped me improve in all areas of my wrestling technique. I also really liked how Coach Tim Flynn really stressed the academics as being equally important as the wrestling.

LHW: Wantagh has an extremely solid lineup.  How does your relationship with your teammates play into your success?   Will you miss them next year when going off to College?

John: Our program is going to be very successful because of the competition in the room between us. I will miss my friends, Paul Liguori, Matt Loew and Q.  Delacruz. These guys are like my brothers.

LHW: What do you think about your chances in defeating MacArthur on December 17th.  What’s going to be the difference in the outcome?

John: I think we match up very well and like our overall depth. If we are on, I feel we can defeat them. We are not taking them lightly as they are a very well coached team. We have to remember they are the defending Nassau County Champions and wrestle at their gym.

John: I have been very lucky to have great coaches in my corner who have encouraged me to work        hard and that it will pay off. When I was a young wrestler, I had Paul Gillespie teach me and  he inspired me, as I always looked up to his son P.J. and now I have Jimmy Murphy as well.   Anyone that works hard and has good coaching can make it.

LHW: That’s it for the serious stuff.  We’d like to ask you a bunch of fun questions, and we hope you find them to be fun as well. Hopefully this can give your fans a chance to know a different side of you.  What’s your favorite song/Band?

John: Down with the Sickness by Disturbed (The Sickness

John: I like Pizza with ketchup. I put this on everything. I also love my Father’s home made chocolate chip pancakes

John: Working out at the gym and hanging with my friends

LHW: What’re three things most people don’t know about you that you think they would be surprised to learn?

John: Singing in the shower, like to see movies and love to watch Sponge BOB.

John: Good Luck to everyone in their own season.

Thank you John for taking the time to answer these questions with LHW….We’re all excited for your success so far this season, and we all are rooting for your continued growth and success.  We wish you all the best.